Each part of the company rating is a linear function, ie. earning 50% of the target for a component will give 50% of the points allocated for that component. Where components involve monetary amounts, these are converted to the currency of the current game; internally these amounts are stored as the pound amount.

Divide the total rating points by 255 to get the percent rating. The maximum possible rating is 100%. Advertising campaigns give an instant, temporary boost to ratings of nearby stations. The boost will gradually fall down to the calculated rating.

Every 2.5 days station ratings are computed; ratings can't change by more than 2 points per cycle, except after crashes.

Note: If the rating gets less than 50%, the station starts losing cargo.

During each cycle of 2.5 days for each cargo type of the delivering industry a maximum of 2 stations can get cargo assigned. If there are more than 2 possible stations with the same maximum rating value for the current cargo type then it depends on internal ordering of the stations which ones get the cargo.

If there's only one possible station then the delivered amount is: produced_amount * station_rating_in_percent, rounded up to the next integer value.

However, in game you will find industries changing their production rate very randomly. It must be stressed the above examples are only true when observing many industries over the long-term; individual industries may greatly deviate from these averages. Statistically speaking, 6 out of 10 industries will not go from 100 to 2100 even with the best service during 65 years. About 1 out of 9 industries will even lower their production when being served at 60-80% cargo transported for 50 years.

HINT calculate easy:
Income = cargo units * cargo value * 0,4
Cargo value (en) comes from the Y-axis on the specific transported goods graph in-game
measure your real delivery time in days and plot on x-axis This result will give you an easy estimation of your income with 5% deviation 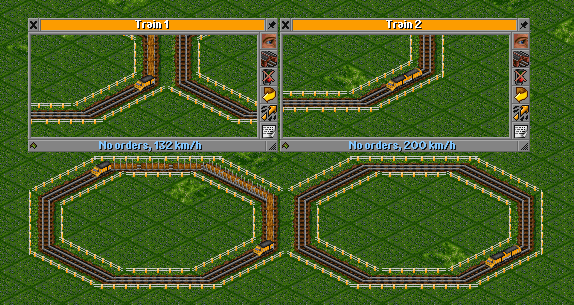 Note: air_drag_coefficient is twice that if any part of the train is in a tunnel

Given the same values, the equilibrium speed, eg the speed the train would eventually settle on if the same conditions continued indefinitely, can be calculated as follows [Assuming a constant rolling_friction (ie the speed stays below 512 km/h), and ignoring the flooring of force and air_drag to an integral value]: