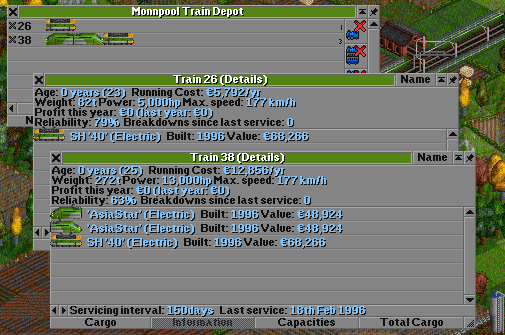 1. - An example of OpenTTD's handling of Multiheaded trains

Multiheaded trains are a way to increase the acceleration and hauling ability of trains. Multiple engines are added to the same train to improve hill-climbing, acceleration, and cargo capacity.

With the "Multiheaded Trains" patch turned on, train engines are treated as cars and can be moved from one train entity to another. Their speed is limited to that of the slowest engine, but their Tractive Effort is the sum of the horsepowers of all the engines present.

Note that this differs from TTDPatch Multihead handling in several ways: You no longer have to create the engine as a train car by holding ctrl. Instead you simply drag the second engine onto the train it is to join. Also, second engines can only ever reduce a combined train's maximum speed, never increase it.

Note that trains which were already multiheaded, such as the AsiaStar and T.I.M., count as two separate cars, each with the same maximum speed but half the horsepower of the complete unit. Only the first head can be used to create a route, the second is only a car and must be attached to another train entity.

- Tractive Effort for a more detailed explanation of the forces involved.