NewTowns is a proposal for OpenTTD to implement a better economy and better gameplay for towns. It is inspired on the many servers where players are competing for the biggest town. Most knowledge assembled and presented in this article comes straight from implemented ideas on those servers. There are some novel ideas mixed in, to add juice.

The main goal for this document is to provide implementors with inspiration on how towns should be handled within OpenTTD. I myself might be an implementor, if I decide to learn C++ sometime in the future.

Currently (August 9th 2010) this is a proposal in alpha status. Most ideas presented here are not yet well described, neither checked on technical feasability with the devs of OpenTTD. When reading through it, expect ridiculous phrased sentences, incomplete/roughly/inconsistent described things and other confusing stuff.

The writing of this document is done from scratch all on the wiki. When this document reaches beta status (all ideas have been described concisely and to certain detail level), a forum topic will be opened. This topic is mainly to get feedback of the ideas presented on technical and functional level.

What is a town? 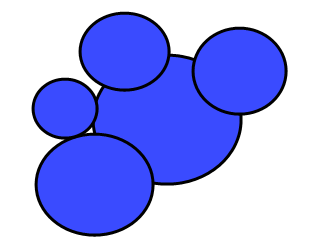 A town can be defined as center of centers. In this case, the town has one original center (middle) and 4 surrounding centers.

A town can be defined as a center of centers. It always starts with at least one center (original center). When time passes and a town grows, more centers are added.

Centers remove the problem of players trying to shape the city such that only roads exist around town centers. Currently industries, parks, squares, fountains, trainstations, airfields are all built as far away from centers as possible. This is because a town´s structure is such that it consists of 5 concentric circles from the center outwards, which each circle adding a level of building size. As such, big towers with 100+ inhabitants will only appear in the most inner circles, creating demand to remove all obstacles near a center.

Adding centers to towns will largely remove this need. Furthermore, it is much more realistic compared to how towns grow IRL.

A center appearing in cities when player provides strong and consistent input/output of a cargo type, for example a Valuables sector might develop if a player services a Bank frequently in that area.

As towns grow, they evolve from settlements all the way to megalopolis. Each type has their distinct properties, the main properties being the types of buildings/industries they host.

What makes a town grow?

A town consists of 4 major parts:

Above 4 parts are mixed in towns, there is no clear distinction in "residential area's" or "commercial area's".

Towns have one or more centers. A settlement has a center, the nametag of the town is located there. Additional centers may be added ingame. Examples of those centers are industry centers, assimilated towns or centers added by the town authority.

In centers, for instance an industry center, it is possible for residential or commercial buildings to appear. However, chances are much bigger industries/industrial buildings will appear.

What is economic activity?

How should towns grow?

Depending on what actions the player executes, several types of buildings may appear. For instance, a settlement can grow with only a local bus service using 2 stops. However, the settlement won't grow any other buildings the small houses/huts. When starting to service industries, and start meeting cargo demands, towns have the right economic circumstances for bigger buildings to settle in town.

Cargo demand differs from the played climate. Cargo demand is calculated not on town size, but using the buildings present in town. For instance, when lots of banks are present in a town, demand for valuables will be considerably higher as compared to one bank. 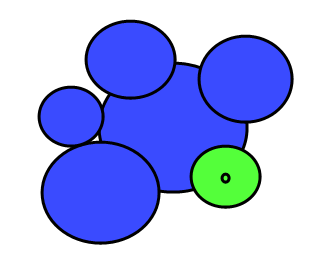 A player HQ is an office building to provide all administrative tasks of the company. Warehouses store cargo, and are built using the "fund new industry" option. Another possible way to build warehouses is using the company window with a button "build new warehouse".

Usually on town growth servers, players are required to monopolize a town by placing the HQ near the town center. When a town is "claimed", competitors are not allowed to build near the center of the town. This radius increases along with the size of the town. Claiming a town is different from "exclusive transport rights": 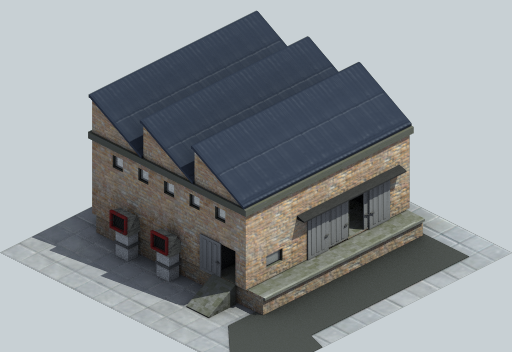 HQ's are used as a warehouse to store goods the town did not need the current month. Cargo which can be stored such as goods, can be used the next month. HQ warehouses should become bigger when the town size increases. This should also be true for the graphics of the HQ. Currently, HQ building graphic is not determined by economic activity, but by the "performance" metric of a company. The performance metric is somewhat representable for economic activity, but it's goal is not the same. HQ's size should be determined by the size of the warehouse and the amount of economic activity performed by the company. Warehouses should be built by the player as an industry with a modular design. The size of the warehouse should generally be in proportion of the cargo throughput of the company. 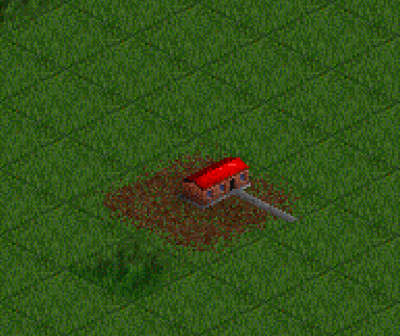 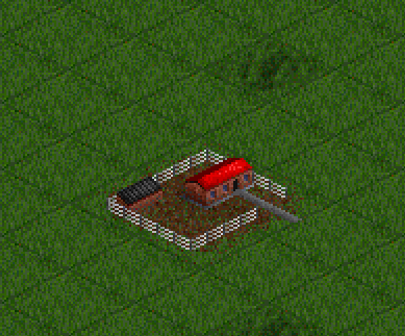 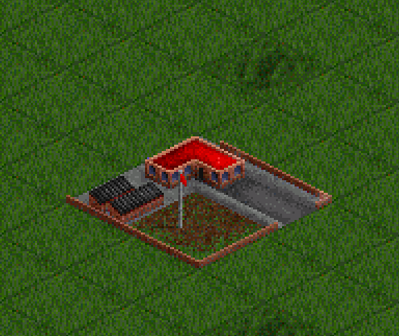 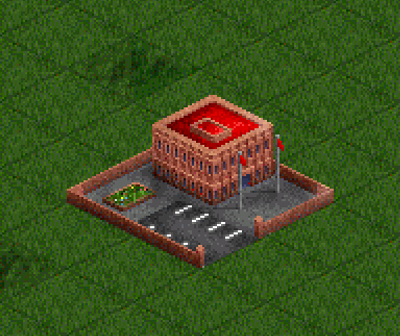 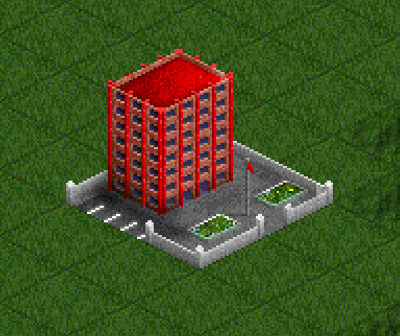 The idea is to add more stages to the HQ. For example, newGRFS such as the one shown below can be stage 7.

An industry center can be developed by offering double the amount of the required cargo type over a certain period of time. Banks may grow, and new banks may open, because the valuables economic activity is high. As banks grow and new banks appear near current banks, demand increases spurring growth of banks further. As another example, new secondary industries may open near location which have certain properties. Those properties may be position near water for shipment, station for train transport, or another factory providing input in close range.

A prerequisite for industry centers is having company HQ (not OpenTTD companies, but newGRF tagged with HQ) buildings in the industry cluster. Another prerequisiste is that the town should have city status. Clusters of certain industry become industry centers when a continuous, steady flow of cargo is brought to town (consistent economic activity). For instance, when all banks are serviced for 200% their needs over a timespan of, say 2 years, the country instance (game engine) may decide the cluster of industries become an industry center.

Industry centers attract HQ's of companies (newGRF's tagged with HQ). Company HQ's are interesting for towns, as they generate a lot of economic activity (and thus growth).

Industry centers may be lost to a town, because of not meeting requirements for a certain amount of time.

Small cheap houses for residential use. Placed at the border of suburbs/countryside.

Houses are small buildings only for residential use.

Apartment blocks are buildings housing multiple homes, and are situated closer to centers.

Skyscrapers are like office towers, but bigger with more capacity. Usually they utilize more then 1 tile.

Cargo industries are generally placed at the outskirts of a town.

Parks have the effect of attracting bigger buildings (office towers/residential towers/skyscrapers) to be build alongside. This mechanism has several aims:

Squares and fountains generally appear in the center of centers. They have the same effect as parks, increasing chances big buildings will locate near squares. Squares, fountains and status can be removed by a player at high authority rating cost.

Companies can built statues themselve to increase station ratings of stations built in the town county.

Stadiums attract relatively many passengers. So many, players are generally required to build a separate station for stadiums. Currently, stadiums are unique to a town: only one is allowed. This restriction should be removed for different stadiums; each stadium type should be unique. A soccer stadium and an American football stadium both should be allowed in town.

Different sized stadiums should be added to the game. Various grades can be distinguished:

HQ newGRFs, not to mixup with the players' company HQ's, are newGRFs of big buildings and industries unique in a game (a company generally has only one HQ). While the HQ newGRFs are unique in a game, multiple HQ newGRFs may exist of the same type of cargo. For instance, a Bank of America HQ newGRF may exist alongside a JP/Morgan HQ newGRF.

When a new HQ newGRF is opened in town, a newspaper message should appear. An HQ opening is usually such a big event that this is newsworthy.