A Cyclotron is a priority merge -or rather a fail-safe joiner- with a loop, so a train can wait at full speed for an opportunity to join a high-speed line. They are most useful to inject trains from a side line into a main, high-speed line, and at junctions between main lines.

According to the edition history of Railway Designs, the first design was proposed by user Pitt2 as follows: 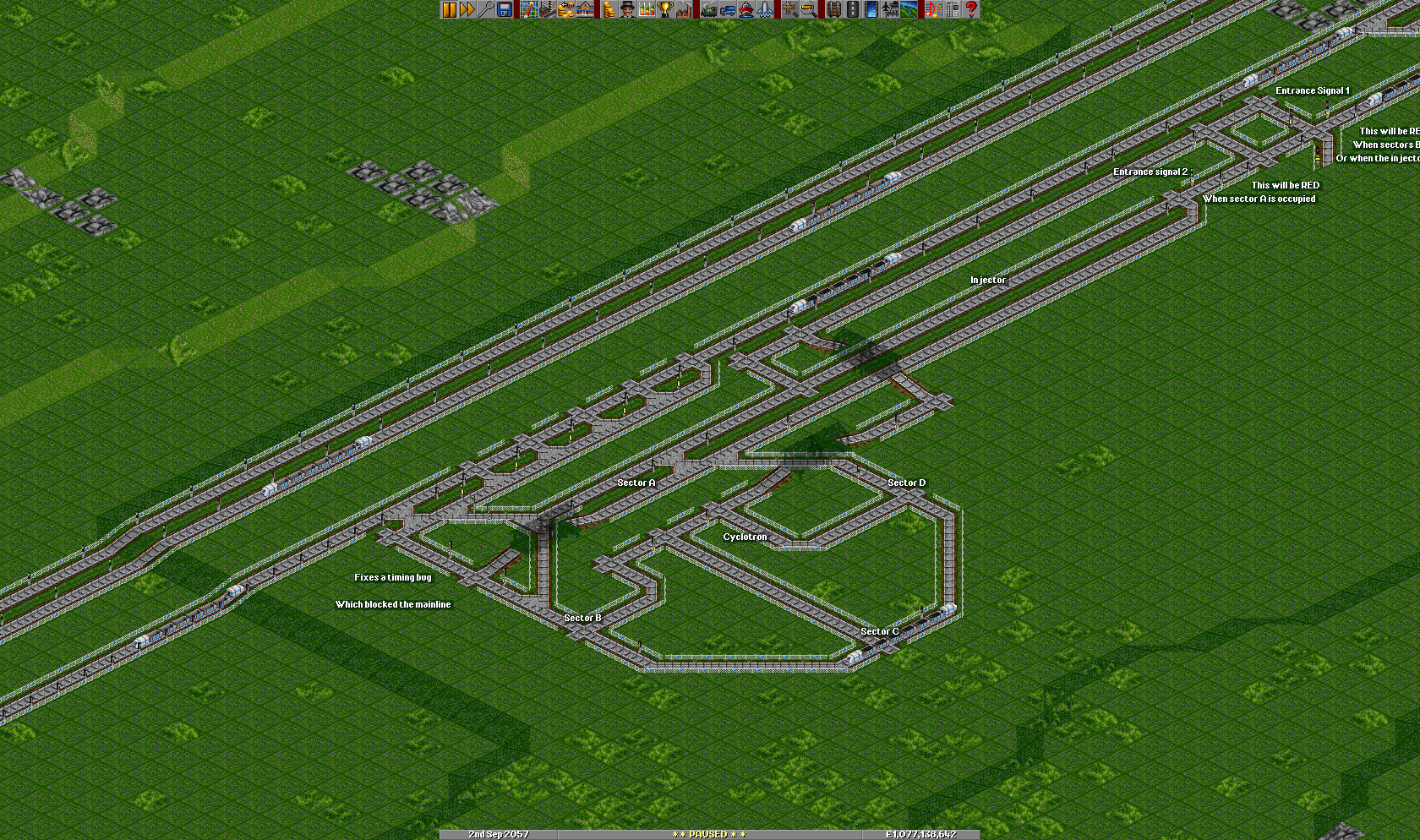 "Consider a sideline that loops back on itself after a failed priority merge. A train in this loop would continue to re-test the mainline for entry conditions, once every 8 * 'TL tiles until it found a space large enough to merge with the main line. After the cyclotron was empty, the next waiting train could pre-accelerate and be injected into the cyclotron, ready to continue the cycle. This system has some flaws, however, as it has a capacity of one train and there will be many missed opportunities due to the train being in the wrong position in the accelerator. Junctions are a large and well-trodden area of openttd; I have restricted myself to unbranched feeder structures. You will find that a highly-optimised stream of trains does NOT weather a junction well."

The design actually includes two trains in the loop, thus increasing the chance to find a slot on the high-speed line, but consider injecting trains into the cyclotron from a standstill, with an acceleration bay.

Refinements on those two points lead to the following design: 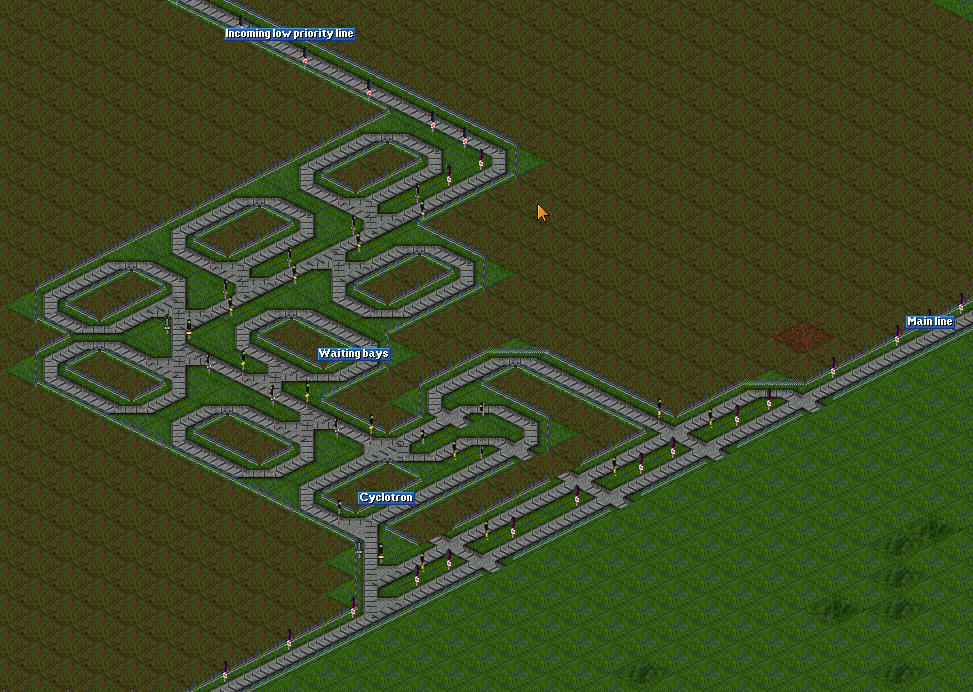 The size of the loop is tailored to the train size. This one is specific for 7-tiles (14 cars) trains.

Let's explain all the details from the mainline up to the side line, so that one can make the necessary changes for a specific train length.

The mainline has the necessary crossings that feed the priority merge's two-sided entry pre signal. One should not allow a gap between signals of more than 1 tile, otherwise a train following too closely another one would come to a stop, causing a traffic jam. Then length of the priority merge depends on the train length. 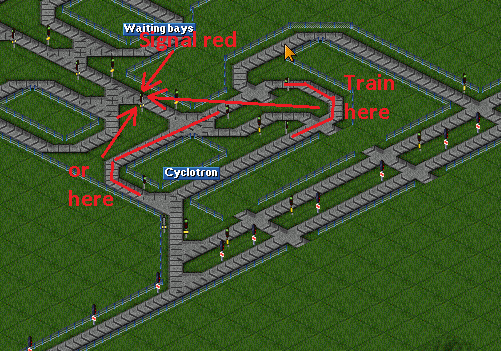 Where in the loop a train forbids entry of the next 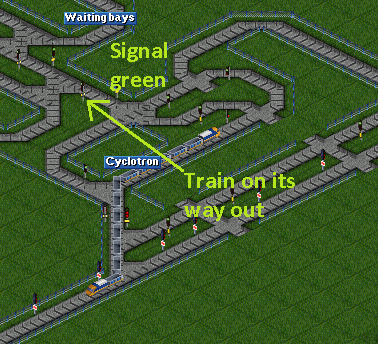 Train on its way out, allowing the next to enter the cyclotron

With those signals in the loop, others are necessary to allow the train to loop and not stop at a signal.

There is another connection lane between the loop and the two-sided pre signal before the loop, so that it stays red when a train is in the loop, but not when the train is on its way out.

That was the actual cyclotron.

Now for the waiting bays. A train must not enter the cyclotron while not at full speed. If it did so, it could join the main line while too slow, causing a traffic jam. To allow for full speed waiting, waiting bays are added. There is no need for cyclotrons here, since there is no joining involved. Two-sided pre signals are used with the same purpose of forcing the train to loop instead of stopping at the signal.

The waiting bays are so organized to allow for a maximum gap of 1 between signals. This way, trains that are well-packed arriving at the waiting bay will not suffer from stoppings and nicely fill the waiting bays while remaining at full speed.

The following design features a smaller loop, increasing tests for slot by a third. 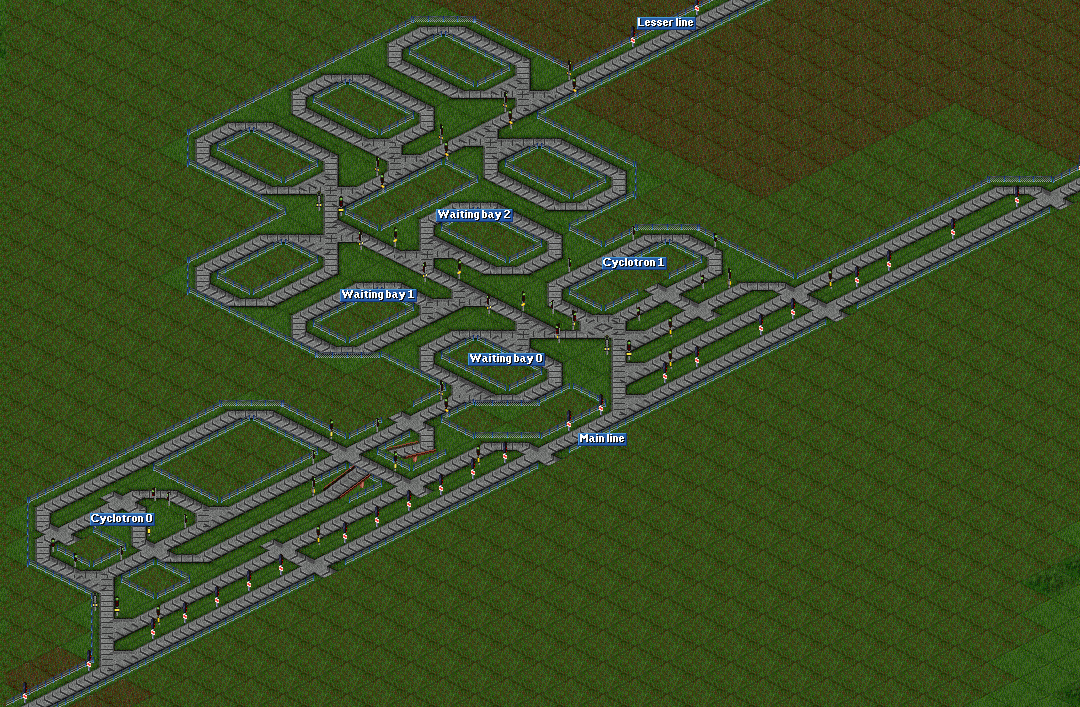 A train that has choice will chose cyclotron 0 -which is optional- if it is empty, because it is the shortest route -no to the main line but to the final destination. Otherwise, they will enter cyclotron 1. Unline all previous cyclotrons including cyclotron 0, trains loop counterclockwise in cyclotron 1. This allows for an elegant factorization. The only connection line (crossing the loop at 90 degrees) has both purposes of allowing a train that is engaged on its way to the mainline to go ahead even if a train has arrived on the main line, and keeps the two-way entry pre signal always red when there's a train in the loop.

With this design, trains take more time (i.e. the distance is greater) from the last waiting bay to the cyclotron's exit. This is due to the fact that

As a consequence, the troughput is lesser than in the previous design. This is to be balanced by the higher slot testing. This design is probably more suited for high-traffic main lines, where slots are scarce, while the previous design may be more suited to low-traffic main lines, where the distance between trains allows for more than one train to enter the main line successively.

It will be possible to use the cyclotron to accelerate trains up to their maximum speed before allowing them onto the mainline, thus using the cyclotron for what its name suggests. Programmable or conditional signals, which are in development, are required to keep the exit two-sided entry pre signal red while the train in the loop is not at full speed.

This will further prevent traffic jams from happening on the main line by enforcing full-speed on it.

If the main line is not fully loaded (there still enough is space between trains), but the looping train can't get a slot because of synchronization mishaps, one may consider adding another cyclotron in parallel. This would give twice as many chances to get a slot.

The waiting bay apparatus can be used on main lines where traffic jams are frequent to ease resolution and save time for debugging. The train density would plummet though, as many more rail pieces would be required for mains lines.