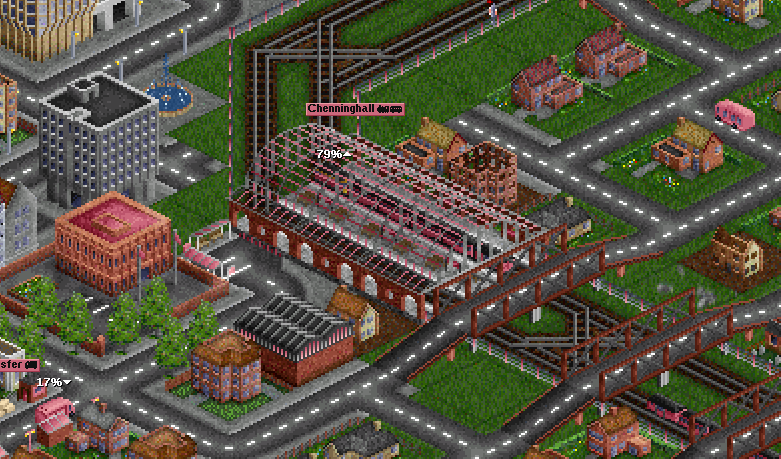 If you don't buy land, there's a chance that your busy railway station could end up being impossible to expand.

It is possible for you to buy a piece of land. When you do this, using the

"buy land" tool on the landscaping toolbar, that tile of land becomes yours. Ownership of that land will show up as a coloured sign on the tile, the colour dependent on which player owns it.

What use is this?

Because land that you own cannot be built on by anybody else (including town authorities), this has several uses:

How can I use it?

Then just click on the area you want to buy, that's it!

How much does it cost?

Can I build on land that I own?

Yes, simply build your station, tracks, road etc. over the top of the purchased tiles. In fact, building on your owned land is cheaper (£60 discount) versus even just bare land!

Can I sell it back?

Yes, you can sell a piece of land and get £60 per tile back by destroying it with the bulldoze tool.

What's to stop somebody buying up vast swathes of land and hindering the game?

Not much, except for the monetary cost of doing this and the fact that you have to buy land one tile at a time (no drag and drop) which will take a long time. It's also against multiplayer rules.

Can I buy someone else's land or can I force them to sell it?

Can I buy areas of sea?

All water is considered international waters, therefore no-one can own them. However, you could raise land there and then buy that land to stop anyone sinking it back to water. This would be very costly, however, and may annoy nearby town authorities.