Each town has a local authority that governs the Towns and its surroundings.

The local authority exists to issue permits for building stations, terraforming, or bulldozing town property. If a Transport company's rating is bad, they may refuse to allow that company to build stations in the authority's jurisdiction. Local authorities are environmentalists and are angered when companies cut down trees, destroy town property, or leave abandoned stations in the town. However, they can be pacified in the long run by efficient transport services and tree planting programmes.

The local authority controls the land in its town and the immediate surrounding area. Use the

tool to see if a tile is governed by a local authority. Tiles far away from any town have no local authority; cutting down trees here has no negative effect.

For any town, the local authority rates each transport company based on its actions and provided transport services. This rating determines what player actions are allowed within its area of influence and is not the same as station ratings.

Note: All the following actions need money. If the player doesn't have enough money for an option, it won't be available.

Advertising temporarily raise nearby station ratings, attracting more customers to a transport company's services and away from the competition. Assuming the ability to afford it, the player can choose from any of three sizes of advertising campaign: small, medium, and large.

A transport company may build a statue in honour of its owner. This will increase its ratings at stations in the area, and looks impressive to passers by.

Funds new commercial buildings, expanding a town's business district for about three months (e.g. upgrading the roads to have streetlights). Like funding a new industry, a company gets no return on its investment except the for the potential new supply of customers for its service (no rent, shared profits, or the like). Funding new buildings again during this period resets the 3 month countdown.

Fund the reconstruction of the urban road network. Causes considerable disruption to road traffic for up to six months. Use this to frustrate other players in multiplayer. There is no other benefit in the basic version of the game although there is a setting for this. Incidentally, vehicles don't go any faster after the roads are re-built. A news headline will appear when road construction is set to begin. 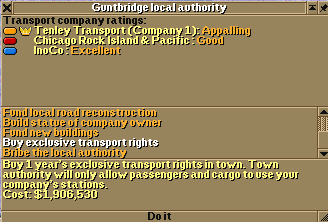 Tenley Transport has acquired exclusive transport rights, as indicated by the crown icon

Buys a year's exclusive transport rights in the area of the local authority. Passengers and cargo will only be allowed to use the transport services of the purchasing company during that time. Conveniently, other players will not be directly notified of this although they can find out by checking the Local authority screen for themselves.

If you really need to improve a town's opinion of your company (maybe to get something built), you can resort to bribes. These are very expensive and risky but can raise your rating quickly.

Every time you try for a bribe, there is a possibility you'll be caught by the "regional investigator". If this happens, the company will lose out on some cargo and not be able to make any further contact with that town's local authority for six months.

The bribe setting must be enabled. This option is not available if a company's rating is already "outstanding".