Is important, especially early in the game when a small balance for the purchase of the RS.

The speed of the locomotive on the railroad for transportation of different cargoes.

Power and maximum traction are related to each other. Both values show how fast your locomotive with wagons able to move and gain speed on railway tracks how quickly the locomotive will be able to overcome different lifts.

You should choose RS to be able to recoup its cost of service within one game of the year.

Operation without forced breaks. Characteristic is important when the player uses the setting "Vehicle breakdowns" in the game.

In the game in section Disasters/Accidents - Vehicle breakdowns, which has three values - none, reduced, normal.

SMU (system of many units)

SMU—method of controlling rolling stock, in which one engages several train locomotives or motor railcars, a traction motor control is conducted with one control and one locomotive crew, is a special case of a multiple thrust. It is used on electric locomotives, diesel locomotives, railcar rolling stock, trams and trolleybuses. The connection of the SMU allows locomotives to increase train weight and increase the carrying capacity of lines. In the buy menu there is a note how many and which locomotives you can join without penalty. Each locomotive/DMUs and EMUs in the description have SMU (system of many units). At this item it is necessary to pay important attention.

The penalty is a tax on inefficiency. The penalty for speed is exhibited in cases when the Assembly of the train impossible at SMU or or occurs not at SMU. At SMU cannot be connected locomotives. When two or more steam locomotives are connected then there is imposed a penalty in speed. Also the penalty is imposed due to incorrect coupling of diesel locomotives, electric locomotives. For example, the locomotive is collected only in 2 sections to it and the player wants to add 2 more sections.

Not to get a penalty in speed, you need to follow SMU each RS.

Very important when transporting passengers and various goods. When buying cars, you should pay attention to the application. For the carriage of cargoes it is necessary to choose industries with the greatest performance. In the carriage of passengers is desirable, but not required, to choose cities with larger populations.


Consider an example for better understanding.
Example 1.The player connected in 1965 two settlements of trunk electrified DC railroad (140 km/h) and wants to buy a train with passenger cars. 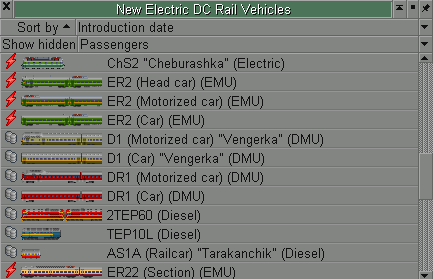 In the item for easy purchase of a passenger train should sort by start time of production, then choose filter passengers. If you are comfortable buying without sorting, it is best to leave everything default. 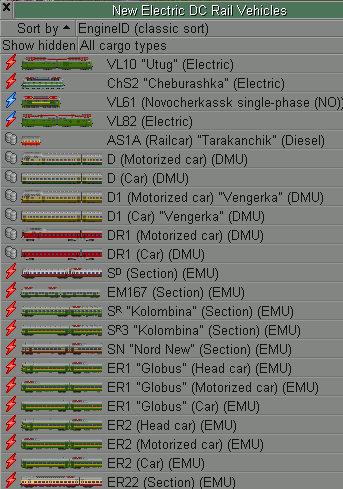 Now go towards buying new trains with more carriages. By 1965, available for purchase many different locomotives and cars. In this case, you need to buy a electric locomotive (DC) or DMU. Consider several examples (see screenshot below): 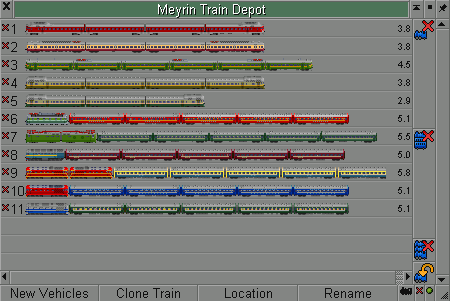 The new trains in the depot

All options are given as examples. КEach player can collect a passenger train in different ways: to passenger cars to attach a mail and baggage cars, choose other schema assembly DMUs and EMUs. In this case, the selected train to be produced not earlier than 10 years ago.