This section cover some of the more common errors that occour in the Windows version of OTTD.

This most commonly is when you first install the game. To resolve this problem, make sure all the required GRF files are in the 'data' folder. These include:

from the original TTD disk and

This could be for a variety of reasons.

You have a slow computer?

Well, what can I say? You need a better computer. Try more RAM or a faster processor. I believe that OTTD works well with a 1.8 GHz processor, 256 MB RAM and a 16 MB Graphics Card, but it will run better with higher specifiactions.

You have 'station spread' on a high level

Station Spread is how many squares apart stations can be from one another. The default is 12, while the max is 64. The higher this number, the slower the game will run.

You are playing on a large map

A large map such as 2048x2048 with a lot of Vehicles (en), Stations (en) and Industries (en) will slow the game down. Try playing on a better computer, or play on a smaller map in the future.

You have programmes running in the background

The game could be slow as you could have a Virus Checker, a firewall, and much other software running in the background. Try and stop as many processes as possibly, using 'Ctrl + Alt + Delete'.

News is not appearing

This is probably because you have set the settings to off. Use the 'Message Settings' tab on the 'News' toolbar to customise what you recieve news reports for and also if you want to turn off the sound it makes too. 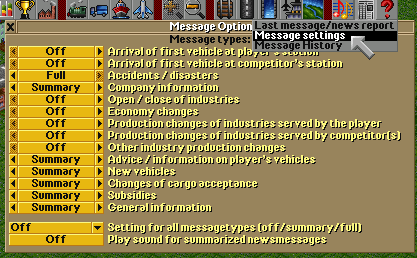 I don't have any music!

Make sure you have copied the music files from the TTD Disk into the 'gm' folder, NOT the 'data' folder.

The game could have crashed for many a-reason. If you un-paused after adding or removing graphics and it has crashed, tough. For all other reasons, please see FlySpray.Make sure you keep your savegames, error logs and any files created.

You removed a graphics set that was in use. I got this once and it wrecked my save. Do not remove graphics in a game.