There are two different situations in Feeder services where vehicles may show a negative income (sometimes a huge amount) although they do an important job for the service. This page explains why that happens and how to avoid it. 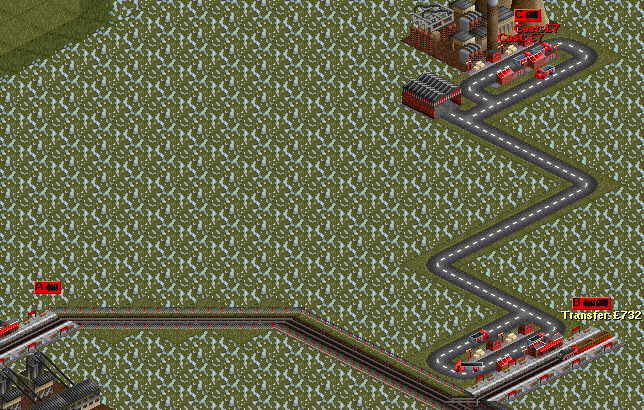 A feeder service from a coal mine to a power plant.

Consider the picture as the example network. The service transports coal from the mine at station A at the bottom left, through an intermediate station B, to the power plant at the top right using station C. The first part of the journey is done with a train, the second part by road vehicles. Admittedly the example is a pretty stupid way of delivering coal. It would have been much easier and faster to deliver the coal in a straight line by moving station B to the place of station C. However this is needed to show the point.

Both cases are differentiated by the way the cargo is exchanged at the intermediate station B.

When the train has the order to unload at B then it won't be paid. The road vehicles from B to C will get all the profit upon delivery at C. Thus the income of the train will be negative, unless it has another income along the way.

Take care that the train should also have no loading set (for versions 0.7 and higher), otherwise, it will load the just unloaded coal back into the wagons, and bring it back to the coal mine (and you will not get paid for your efforts).

Now the train has the order to transfer at B. This time the train will have a positive income, however the road vehicles exhibit a negative income. Let's see how this happened.

The payment for all delivered cargo no matter how it gets to its destination is done by a fixed rule (see for all the detail on the game mechanics page). Basically,

The game does not know where coal loaded into the train is going. When the train arrives at station B and transfers the coal, the game makes an estimate of how much you should get paid. It finds that 732 British pound is a fair amount, and assigns that to the train as virtual money. Next, three road vehicles take the coal, and deliver it to the power plant at station C. Here, the game detects that the coal is being delivered to its final destination. It computes the exact payment (about 711 pounds) for delivering the cargo from the coal mine directly to the power plant, deducts the already given 732 pounds, and comes up 21 pounds short. As a result, each of the road vehicles has to pay 7 pounds. In other words, the vehicles get the bill for the (apparently) overestimated payment of the train.

A complicated multi-hop delivery is usually a good indication of negative income. If your vehicles make a detour, that is going to cost money.

Another common case is the speed of delivery. The payment of the train is done with the same rules as the final payment. Since a train is much faster than a road vehicle, it gets less fine for slow delivery, that is, it gets more than it should given the average speed of the coal over the whole journey. The road vehicles also pay for their slow speed compared to the train.

Reducing or preventing negative income for vehicles in feeder systems

First of all, as explained above, the negative income is done to compensate for payments done earlier to you for the cargo at intermediate points in the feeder system. So while it looks a bit weird, you do get paid for all delivered cargo. There is no real need to worry about it.

If you are more happy with only yellow and green payments for all your vehicles, you can reduce or eliminate the negative income by changing an advanced setting. In the 'Advanced Settings window', section 'Economy', there is a "Percentage of leg profit to pay in feeder systems" setting. With it, you can reduce the amount of money that vehicles get at intermediate stations. As a result, there is more money left to pay at the end of the journey to the vehicle delivering the cargo at its final destination.

Note that this is a global setting, all vehicles using transfer orders are affected by it.