Note
This article describes how to manually set up a one-way feeder service. This is not necessary if you have Passenger and cargo distribution enabled in OpenTTD v1.4 or later.

Note
If you want to create a Two-way feeder service then look there. The method described on this page works only in one way.

A feeder service is, put simply, one where vehicles perform a "relay" with the cargo. For example, a bus might pass passengers onto an out-of-town airport so that they can be flown across the map to gain more revenue.

In certain cases vehicles may appear to have a negative income even though they are important parts of a profitable chain.

Buses feeding an airport with passengers from a nearby town

For example, passengers arrive at the bus stop and a bus picks them up, the bus takes them to the local airport which is out of town and doesn't usually accept passengers. The bus is set to Transfer and leave empty at the airport and the passengers will leave the bus and wait for a plane to pick them up.

It does not always make sense to set up a point-to-point service for every possible route. Often, a hub based system makes more sense as it eases load on your network and enables passengers and cargo to use different types of transportation to move from A to B more efficiently. This is what the transfer button is for.

How to set up a transfer route

So, imagine you have an airport in town and you wish to use a bus to bring passengers from the town centre to the airport. This can be easily accomplished:

First, the bus station must be built directly next to, as in touching, the airport. If there is a gap between the stations, the game will display a different name for the bus station, and transfer will not work. Or, when placing the station, hold down the CTRL key and click where you want to place the station, then select the airport station from the list that appears. See combining stations for more information on how to do this. 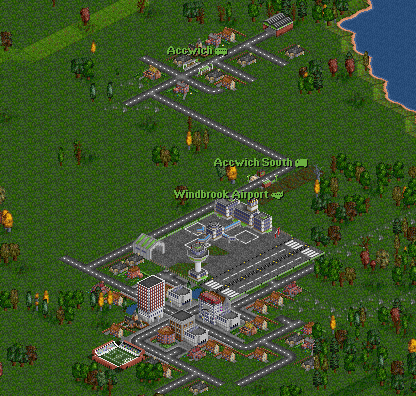 This will not work due to the two separate stations

Set up the route as normal, and select the Transfer button to tell the passengers to wait at the airport for a flight. To prevent the bus from stealing the plane's passengers, also select Unload. From OpenTTD 0.7.0 on, select No loading and Transfer from the dropdown menus. The order now reads Transfer and Leave Empty. 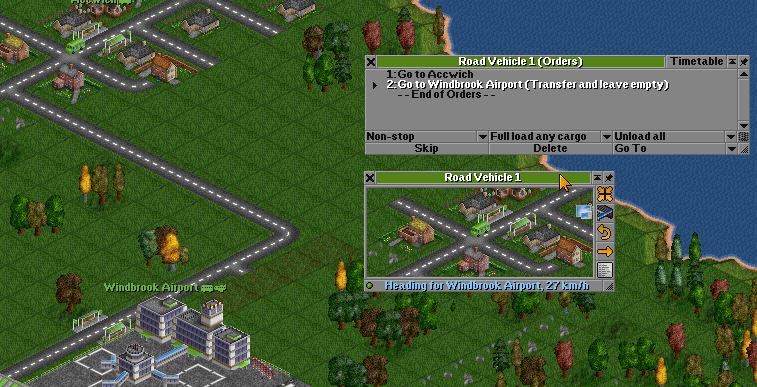 This way, the bus always moves passengers to the airport for further transportation.

How to set up a more complex system 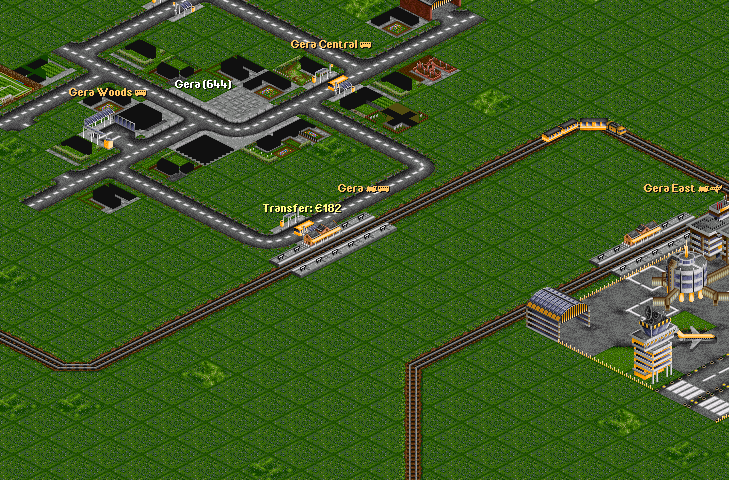 Complex feeder system. Buses bring passengers to an nearby train station. The shuttle train picks them up and transports them to the airport.

You might have noticed that (and wondered why) you can combine transfer with full load and unload (or no loading respectively). This can be used to set up more complex feeder services. Imagine you have that very same airport as in the example above. This airport has a number of Townss around it, and you'd like to have a shuttle train that goes through all the villages to collect passengers.

This way, all the people from all stops are dropped off at the airport and board their planes.

Another appealing aspect is to employ a local bus network in order to take passenger from all over town to a central train station. The transfer and take cargo is also useful if a vehicle is supposed to pick up cargo from several regional stations and then to deliver it to a destination far away, just like trains do in real life.

Speeding up a complex feeder service

From version 0.7.0 on, you can give your shuttle cars the No unload and take cargo order at all villages. This does the same like transfer and take cargo (see example above), but prevents the passengers from deboarding (i.e. transfer) and hopping on again. This makes the feeder service even faster and more realistic, because the train will only pick up the new passengers, while the passengers from the previous stations will remain in it.

A distributor service is the opposite of feeder service. The cargo is transferred to a distributor station and picked up by one or more local services that haul it to the final destination. Typically the route from the source to the transfer station covers the most distance, and earns the most money. However, just as in case of ordinary transfer services, the income may be counted on behalf of the vehicles that do the final delivery.

Distributor services don't make much sense for passengers, but they are very useful for cargo deliveries in some situations: