A setting that allows you to build a new train station right next to an existing one.

Note
A good complement to this patch is Nonuniform stations, which allow you to build any weird station you can imagine.

This feature is enabled by default. You can disable this patch through the configure patches -> stations window or use the following syntax in Openttd.cfg: 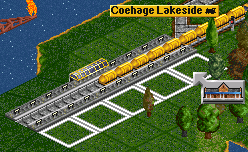 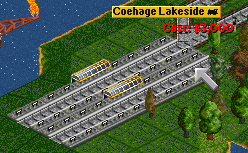 With Build on slopes enabled you can even have multileveled stations 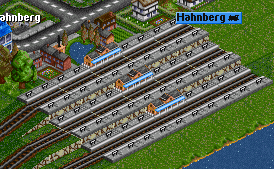 Join stations on different levels to get multilevelled stations

Enabling non-uniform stations gives you much freedom, although any station must fit into a square whose size is specified under Configure patches/stations/max station spread. A single station with nonparallel platforms

It is even possible to have a station with parts that aren't joined. Imagine if I bulldozed the helipad on the previous one.

If you bulldoze any tile of train station, all the train station squares attached to that station will be destroyed, regardless of train type (rail, monorail, MagLev).

you could remove a single tile of station! 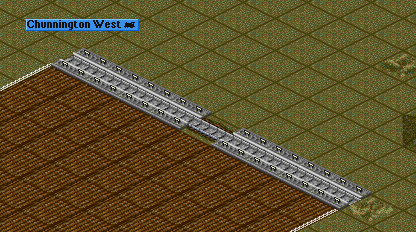 The tile containing the station building has been cleared and replaced with a track.

You can join up to 8 truck loading bays or bus stations, see Multistop.

If you aren't satisfied with your station's coverage area, you can increase it: decide in which direction you want an increase. Join a bus station in that direction. Build a truck loading bay further in that direction. Now demolish the bus station, and rebuild it further, but still joined. I hope you get the idea by now. That thing, with a station spread of 64, can go very far.