This property defines the name you will have when you play Multiplayer. It is considered polite not to leave the name as 'Player'. It doesn't have to be anything special - possibly your nickname, forename, or initials. Use your imagination. This name identifies you to other players in a Multiplayer game and is useful for identifying senders of chatting messages or in Client-list sending players money.

When first joining a multiplayer game your Transport company will likely be named after you (e.g. if you set your name to "Jeff" then your company will be "Jeff" Transport by default). 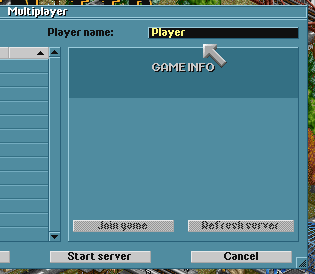 To change your name during a game, the name Console command can be used. To do this, open the console and type name "<newname>", replacing <newname> with your new name.

The player name that you set sometimes replaces the town that you built in first (i.e. "Blah" Transport instead of Gilwood Transport)

Stub
This article is a stub. Please, if you can, expand it.
Categories:
Folder: Settings