Monorail, meaning 'single-rail', is based on an existing technology, where a train is travelling on a single beam, rather than two separate tracks. Several countries in the world use monorail for daily train service.

The toolbar for building Monorails is found under the

build railway menu item and are the third kind of tracks available to build. These tracks support only the Monorail specific vehicles.

There are the two Monorail trains available in Temperate, Sub-Arctic and Tropical climates:

And one train in Toyland landscape:

None of the Monorail vehicles in OpenTTD has a real-life equivalent, they are purely fictitious. 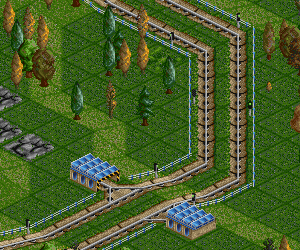 A section of Monorail tracks