MagLev is the English abbreviation for "magnetic levitation," which is an existing technology (though it isn't used worldwide.) This technology allows Trains to "levitate" (that is, to hover, or stay in the air) due to repelling magnetic forces. Because there is literally zero friction between train and its tracks, the train and its cars move very fast. The current world speed record for a manned MagLev train is 581 km/h (361 mph) by SCMaglev MLX01 on December 2, 2003.

The first in-game Maglev train (Lev1 'Leviathan' or Wizzowow Rocketeer) is available in 2021.

The toolbar for building MagLev's is found under the

build railway menu item and is the last to be available to build. These tracks only support MagLev-specific vehicles.

There are four Maglev trains available in Temperate, Sub-Arctic and Tropical climates:

There is only one train in Toyland landscape:

None of the MagLev vehicles in OpenTTD have a real-life relative; they are purely fictional. 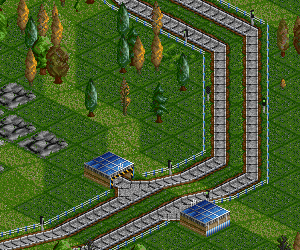 A section of MagLev tracks