Towns are where the inhabitants of OpenTTD live. Each town has a population which can grow or shrink depending on certain conditions. 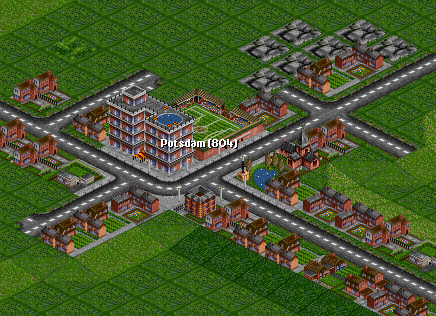 The small town of Potsdam.

Most buildings in the towns provide a source of Passengers and Mail which can be transported to other towns or within the same town. During an economic recession, there's only half of the usual amount.

In some cases buildings may also accept other cargos such as Goods or Food. For a station to accept these cargos, the buildings in the station's coverage area must accept a total of at least 8/8 of the cargo. Use the Land area information tool to find out about the cargo acceptance of individual buildings.

Sometimes new buildings will increase the number and amount of cargos accepted in a town (such as Goods).

Over time, towns will grow very slowly even if no service is provided; however players can influence town growth in several ways.

Town growth can be accelerated by loading or unloading at least one item of cargo at up to five stations within town influence within a 50 day period. It does not matter which cargos are loaded/unloaded. 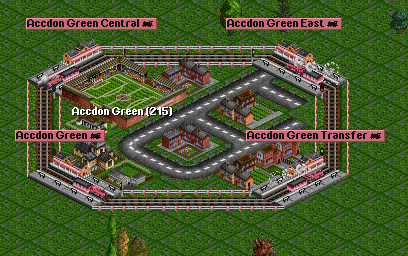 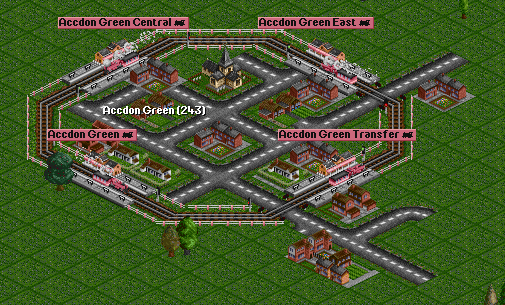 Pre-built road networks can speed up town growth, as the town can build houses all the time instead of houses and roads. If towns are allowed to build roads and the road layout is a grid, the pre-built roads should match this grid, otherwise they block house tiles. 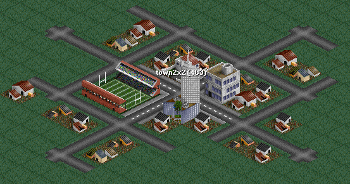 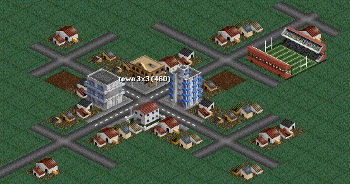 A big city needs plenty of space. Without obstacles, a population of 1 million requires an area roughly 150-200 tiles in diameter depending on road layout and the types of buildings available. Transportation systems or other objects may increase this number. 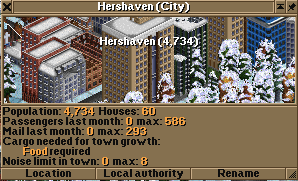 If the centre square of the town is above the snow level, at least 1t of food per month must be delivered for the town to grow rapidly. The town information window will show whether food was delivered recently.

The towns will grow very slowly on their own, so in the case of small towns not large enough to accept food, it is simply a case of waiting for them to grow. As with any other cargo, a station needs at least 8/8 of food acceptance in its coverage area before it accepts food.

The quantity of food delivered has no bonus effect on the rate of town growth, beyond the effect of general loading and unloading of cargo in the town's area of influence.

If the centre square is not above the snow line, food is not required for growth, although food will be accepted. In cases of varying snow lines, a town will only grow during the summer if food is not provided. 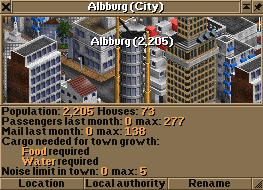 If the centre square of the town is in the desert, at least 1t of Food and 1,000L of Water per month must be delivered for the town to grow. The town information window will show whether food and water was delivered recently.

If the centre square is not in the desert, food and water are not required for growth, although Water Towers may still exist in the town and food/water will be accepted.

In the Temperate climate, a simple bus service can drastically increase the population of a town. It is sensible to connect not-too-distant small towns together with bus services to bulk-up their population before a train station or airport becomes viable. Alternatively, creating a bus route within a larger town can produce an even higher rate of growth. The bigger the buildings, the bigger the passenger rate. If you are transporting passengers, be sure the population is more than 500.

Delivering the cargo "Goods" does not have any extra effect on town growth in any climate than any other type of cargo. The reason for this common misunderstanding is that towns which can accept Goods in early game are usually City class (meaning they grow naturally faster than regular towns) and a town receiving Goods tends to be forgotten by the player after some time, so when the player check the town again it appears to have suddenly grown unexpectedly.

Each town is managed by a Local authority that determines which actions a Transport company may take in or near each town. Clearing trees (including those cleared by landscaping or bulldozing), destroying town's industries, buildings, roads, tunnels and bridges, and leaving abandoned stations in the town (stations that have not transferred cargo in the last 50 days) all lower the company rating in the town. However, planting trees, successful bribes, and providing services to the town (stations that have transferred cargo in the last 50 days) all increase the company rating. To place a station, the company must have a rating of at least -200 (Poor).

Use the Land area information tool to find out which local authority a tile belongs to (if any).

The town will automatically construct roads as the town expands. It will always lay crossroad every two or three tiles as long as there is flat land. (sloped roads cannot be crossed by others) In some cases, three or more town buildings may be built along a straight road (on the flat land). However, as the town expands, it may demolish one of those buildings to make way for the new road that extends from the crossroad (even the road only extends one tile forward from the junction).

Obviously if a player wants the town to expand more efficiently, building player-owned roads and intersections for the town is required. It involves building the latitudinal and longitudinal roads every three tiles around the town like checkers, leaving four tiles of each block for the town building to be constructed. If the crossroads spread more than two tiles away, the town will persistently construct the crossroads on the player's own road between the existing crossroads.