Loading bays are loading and unloading points for road vehicles. There are two loading bays, one being for buses and passengers, and the other for lorries and goods.

A single Bus Station can handle at most two buses at once. Other buses will be waiting on the road before the station. This can cause (temporary) lockups, which are almost unavoidable. However, by using the multistop feature, bus stations can handle a much higher capacity of traffic as buses will try and pick an empty station square instead of blocking up a busy station. There are no limits to the number of buses you can send to a single station.

Lorry Stations are identical to Bus Stations except they handle lorries instead of buses. A single lorry station can handle at most two trucks at once. However, in OpenTTD, multiple truck stations can be joined using the multistop feature.

While inefficient compared to railways, the lorries in OpenTTD are cheap to run, and can turn a profit if used correctly. It is possible to run a company using only road vehicles. 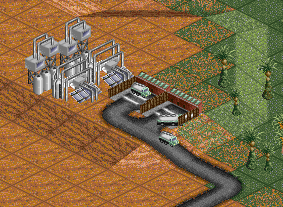 Multistop is a way to build two or more road vehicle stations next to each other, while sharing the same station name and cargo. Buses and trucks will then use the available spaces in all connected stations instead of waiting for vehicles to leave. This is a useful way to deal with capacity problems at your bus stations when towns start to grow.

Multistop stations can be built to a maximum size of 16 stations before becoming too large. If you try to add extra stops, a warning will be issued. This limit includes connected stations of other types.

It is possible to combine road stations with railway stations. For example, when there is an industry near the station but out of its catchment area, you can use trucks to transfer the cargo into the station and onto a train. This is called a feeder service. 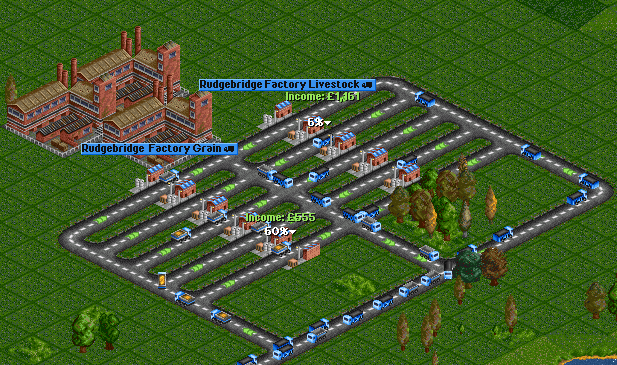