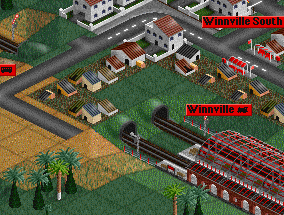 Warning
This page is not maintained. All relevant information concerning the base graphics replacement OpenGFX are found in its readme or at the DevZone

This is the main tracking table of the 8bpp Graphics Replacement Project. The ultimate aim of this project is to have a full replacement set of graphics, so that OpenTTD can be distributed freely without the need of the copyrighted graphics from the original Transport Tycoon Deluxe. The table below indicates what's done and what's being done. There is also a tracking table for advanced features for the new graphics. This page lists all missing graphics that will need to be drawn for a total graphics replacement and shows their status in the tables below. If you want to draw something then add your name to the appropriate section and change the status to Work in Progress, {{WIP}}. When you are finished, change the status to Done, {{Done}} and link to the graphics published at TT-Forums.

The latest progress can be followed in the Transport Tycoon Forums. This wiki article will generally be the most up to date status of the project. See the OpenGFX Readme (en) on how to get the latest alpha release.

There are 6990 sprites to be replaced in the original TTD grf files.

Key areas needing work are GUI, bridges, buildings and industries. Other infrastructure and the landscape are largely complete.

Key areas for more work are town buildings and aeroplanes. Once the "conventional" climates are finished the focus will shift to toyland.

Key areas needing work on opengfx1r.grf are the remaining town buildings and monorail and maglev vehicles.

The list of bugs has been moved to the Issue Tracker. Either report bugs there or post a message in the release topic. Thanks!

This is a graphics replacement project, not an opportunity to code additional features into the game. Additional features for the game, such as more vehicles, new vehicle statistics, climate specific road markings etc. will have to be released as a separate GRF.

All sprites from the original base graphics now have an OpenGFX version, there are no missing sprites! Many sprites do, however, need improvement. Post any updates in the tt-forums thread.

The 'old tracking table' is deprecated and has been moved to this page for the main purpose of reference only.