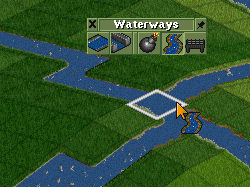 Construction of River in Scenario Editor

Rivers has been introduced in OpenTTD during the development towards OpenTTD 0.6.0 (more concret in r11926). The first testing-release which contained the feature was OpenTTD 0.6.0-beta 4. Rivers are similar to

Water Transport Tiles but can be generated during the map generation-process (since r22767). Player can only build river in Scenario editor (available in the waterways construction menu) but not normal gameplay as Canal functions the similar way with the only difference being that River can be created on a straight slope (but not diagonal slope).

Shipss can sail via level river, but the river on a slope must be reconstructed to a

Water Transport Tiles for passage. River will automatically connect to another River or Canal tiles when they are constructed adjacent to each other.

Water Transport Tiles can be constructed on the river given that there are enough River or Canal tiles and a straight slope against the level river tile.

Buoy can be placed on a level River tile without problem too.

In normal gameplay player can Landscaping the river tile and restore it to normal land. The cost of demolishing a River tile is the same as demolishing a sea-level water tile with the base cost of 7,500 pounds per each tile. (On a side note, this is twice the cost of constructing Canal over the River as well as demolishing the Canal.) Unlike tree or structure owned by town, demolishing river does not reduce player's company rating to the nearby Local authority. Towns will not demolish river while extending, instead it will use Bridges to cross over the river.