The Scenario Editor in OpenTTD is a tool which allows you to create your own scenarios for OpenTTD. It can edit and create scenarios in all four climates. It allows the landscape to be randomly generated, towns and industries can also be placed randomly, allowing scenarios to be made with relative ease.

A generated scenario can be edited further by adding or modifying the towns, industries, roads and waterways, or by additional terraforming. Since there are no companies in the Scenario Editor it isn't possible to create things that are exclusive to the company who built them. This applies e.g. to railways or airports.

It is possible to expand towns to their largest sizes possible. The scenario editor can be started directly with the -e option.

Started from the main menu the scenario editor generates an empty flat map. In order to generate another map or change the map size you can call the generate map function: 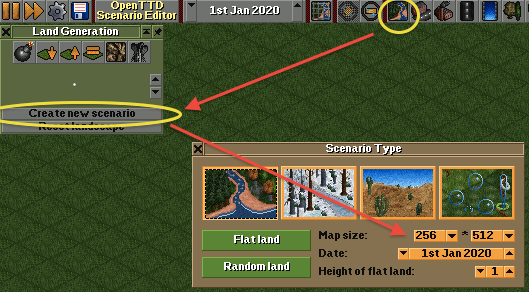 The scenario editor was not present in the original Transport Tycoon of 1994, but was introduced in its World Editor expansion pack. It stayed in TTD, and was therefore in OpenTTD from the start, and from then on undergoing many updates.