This article is about Docks, buoys, canals and locks. To learn how to build docks, see Building docks 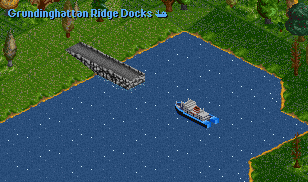 A MPS Passenger Ferry using a dock in OpenTTD

Docks are the loading and unloading stations for ships and ferries. They can be built on any coastline that is straight, and not diagonal. Ships use docks to load and unload. They can be used to ferry passengers and goods between docks, or Oil from Oil Rigs to Docks. Oil rigs have a dock integrated that allows oil to be loaded. Docks are typically the least used station in OpenTTD, as even though ships can make a decent profit if used correctly, they take a long time to generate such revenue.

Oil Rigs, while industries, have a neutral dock integrated with the structure to allow ships from all companies to dock with it. This is for the loading of oil (and to a lesser extent, loading and unloading of passengers.) There may rarely be an Oil rig within reasonable distance of an Oil refinery, so Oil Rigs are used less, unless land is raised and a train station built adjacent.

Buoys, while not docks, allow ships to place orders on them, this is to create waypoints, so the ships can navigate canals or geographical objects. Use these on longer routes, or if your ships become stuck.

Each buoy was built by a certain company, but they don't have an owner. However you can't remove buoys which are referenced by any vehicle's orders, including since r20579 the orders of other company's vehicles.

Canals work exactly like sea tiles: They can be used by ships to traverse the game world. Canals, however, have the advantage of being able to go on top of land tiles. For ships to enter Canals, or move from one height level to another, they must be connected by locks. Canals themselves can be used to bridge land to reach other bodies of water, or to cut across large pieces of land where raising and lowering land would be uneconomical. If there is River already on the way of the planned waterway, you can build the canal adjacent to the river tile, they will join together side by side, because ship can sail via river on level tile as well, easing the cost of building the whole span of canal. 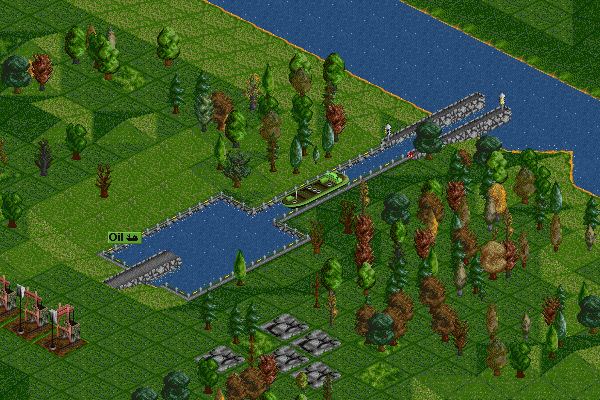 A lock and a small canal in a temperate setting

Locks, as their real-world counterparts, are used to change the height at which a ship is sailing. This has the useful purpose of allowing entry to Canals, as well as allowing ships to change height from one canal to another. Locks and Canals can be used to allow ships entry into dry areas, for large scale shipping or to bridge smaller lakes. They are, however, expensive: $16,000 for a single lock or Canal tile (exact numbers pending).

Building a lock requires a flat tile, a sloped tile, and another flat tile, in that order.

Note that Locks in OpenTTD, like real world counterparts, cause ships to stop for a moment while they raise/lower the ship to its new height.

Aqueducts over the road

Aqueducts are similar to rail or road Bridges for allowing ships to cross over the terrain, but unlike bridges for trains or cars, aqueducts can never change level. The entry and exit tiles of the aqueduct must be diagonal on the same level and facing each other.