When you want to transport large amounts of cargo or when industries are located in the middle of the sea (Oil Rigs for example) you may need to use water transport, even if it is quite slow.

You can start constructing by pressing the docks build button

on the menu bar. Once clicked the Docks Construction toolbar pops up.

What do all those buttons do? The buttons are self-explanatory. From left to right:

You can only build a dock at a slope that is connected to a water tile. This can be both at sea level, or as a part of a canal or River. 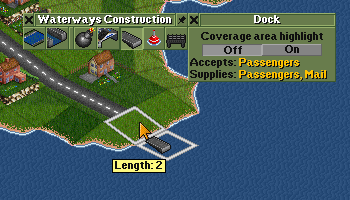 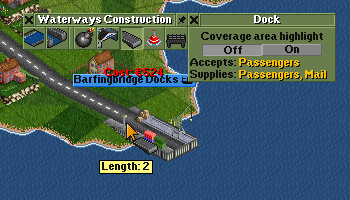 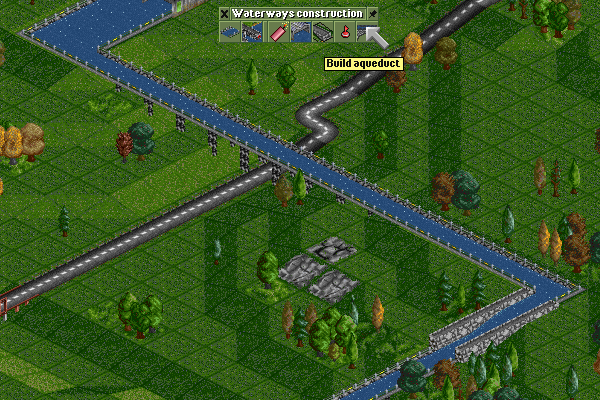 Aqueducts are like bridges, but for ships. Unlike road or rail bridges, the ends of an aqueduct can not be placed on level land, but only on sloped tiles. The slope also has to be in the correct direction, as the aqueduct, like normal canal tiles, can not be built using foundations ("build on slopes" feature).

To build a Ships, place a ship Depots and then click it. You will be presented with the depot window. Select "Build new vehicles". A new window should pop up with a list of different ships to purchase. Select one you think will be necessary, and then press "Buy Vehicle" at the bottom of this window. The ship will then appear in one of the slots in the depot window and a window will pop up. Give it orders or refit it as necessary, and then click on the red "Stopped" text to start it!

In order to make your ships operate properly, your dock must be directly near, for instance, an oil refinery, so that oil can be offloaded directly. If the landscape prevents you from doing this, you can build a transfer station where the oil will be loaded off the ships and transported further, e.g., by trains. In that case, you must build a train station next to a dock (or use CTRL button to join stations) so they share a station sign, and use 'transfer' orders for the ships that deliver oil to the transfer station. Trains can then retrieve the oil to take it to a refinery.

Note that you should use 'transfer' orders only at intermediate stations, never at the final destination, or the cargo will only sit around at the station and you won't be paid for it.