When using Realistic acceleration, corners slow trains down a lot. This page gives some basic advice about minimising the effects of corners.

Trains suffer a speed limit when crossing more than one corner in the same direction at the same time. Here are some examples: 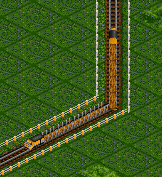 no speed limit: only one corner 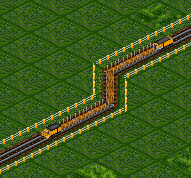 no speed limit: only one corner in each direction 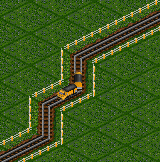 no speed limit: train only ever touches one corner at once 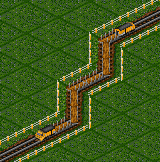 As a general rule, put at least as many squares between corners as the length of your longest station.

Try to avoid building long diagonal track near towns, because this can limit town growth. When you have to build diagonal tracks near towns, create road tunnels or road bridges at regular intervals, so the town can expand over the railway.

If train length isn't an issue, you can calculate the distance you need between corners by comparing the fastest trains available with the table of speed limits. Here is a rough guide based on that information:

Note: Technically, the SH '125' (also known as the BR 'IC125') wants 8 squares to turn, but it's not powerful enough to get up to full speed carrying that many wagons anyway.