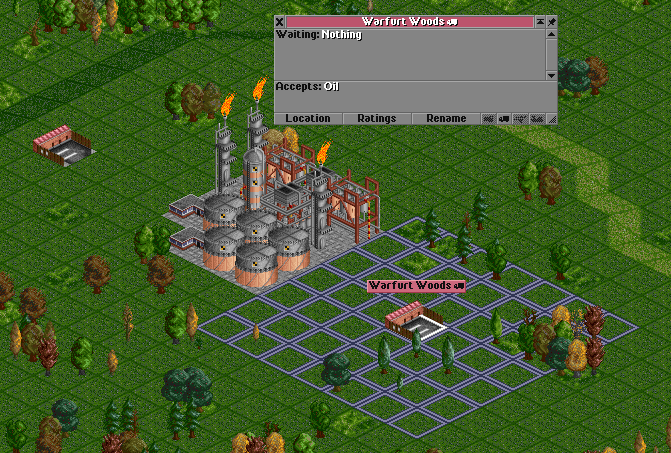 In the screenshot, the blue zone is the station's catchment area.

The Catchment Area of a Stations (en) is the radius around the stage that it can service. Town-buildings and Industries (en) that are within a station's catchment area accept Cargo (en) through this station, and will place their cargo at the station to be delivered elsewhere.

If the Allow more realistically sized catchment areas option is on then the size of the catchment area depends on the type of the station. Otherwise it has a radius of 4 tiles for every station.

Every industry square can provide the cargo produced by that industry. Having multiple catchment area squares overlapping an industry doesn't give any advantages. However, coverage for town-building has direct effect on Passengers (en) and Mail (en) received. So the strategy to boost the town growth and building non-physically attached stations to increase the catchment area will improve the patronage of large station which is difficult to be built near the center of the town.

In some industries only certain squares can accept the cargo required by that industry. You can use the Land area information (en) tool to find out which square accept cargo. When building a station you can see, in the station building dialog, which types of cargo will be accepted by the industries in the catchment area. For non-physically attached combined stations the catchment area also covers all the space between the individual stations. Both stations in the picture wouldn't accept oil if they were built as separate stations because they are too far away from the refinery. But since they form a single combined station their catchment area extends over the refinery and makes them accept oil. This only applies for delivery, not for pickup of cargo. Thus the pictured stations won't get the goods produced by the refinery. (The described case and picture applies when the Allow more realistically sized catchment areas option is enabled.)