To learn how to build and manage airports, see Airport construction.

Small airports are the smallest type of airport in OpenTTD. Although they played a more prominent role in the original Transport Tycoon, Transport Tycoon Deluxe and OpenTTD still include them. The airport can service two aircraft at a time, including helicopters. The Small Airport is prone to traffic problems because aircraft must use the runway as a taxiway between the loading zones and the hangar, and to taxi into place after landing and before takeoff.

This airport can also be a victim of the dreaded Zeppelin Disasters that can happen in the early parts of the game. Also, big planes are very prone to crashing on this type of airport due to its small runway (5% chance on every landing).

The Commuter Airport is a newer airport designed to handle a small amount of planes for unloading and loading within cities and servicing small towns. Although larger and superior to the Small Airport, big planes can crash on landing because of the small runway (5% chance on every landing). The throughput is greater than the City Airport, due to shorter taxi times, and two Commuter Airports can carry more traffic than an international airport.

It also utilises the graphics the later airports use, so it is a fitting upgrade to small airports with old planes well into the late game stages. This airport has a footprint of 4x5, and has three loading pads with two helipads.

The City Airport (called the Large Airport in original TTD) is one step up from the Small Airport. It has three loading/unloading bays for aircraft, and one runway. It can handle a decent amount of traffic, but as there is only one runway, the amount of planes processed drops steeply, as planes go to wait in the hangar and cannot leave again due to the traffic.

This airport is the first airport available that can handle jet aircraft, most notably the FFP Dart/Aerospatialle Caravelle. However, as a result, the airport's footprint is increased, as the runway needs to be larger. This airport can also have a plane and a helicopter land simultaneously, as the helipad is not located on the runway, but at the intersection of the taxiways.

This is an improved version of the City Airport, and is different in that it has two runways (one for landing aircraft and one for those taking off) so that it can handle more traffic. Also the catchment area is slightly greater. All other features are the same.

This airport can handle much more traffic than the City Airport, but is still inferior to the International Airport, as planes that have landed must cross runway two to get to the terminal. This affects planes taking off, and can cause a backup of traffic.

The International Airport is the second-largest airport in OpenTTD. It has two runways, like the Metropolitan Airport, but each runway is on the opposite side of the airport so that planes that are arriving/leaving do not obstruct one another. The terminal can handle up to six planes loading or unloading at once. The airport also has two hangars, so that more planes can be serviced. Three helicopters can land simultaneously, while only two helicopters can load/unload at once.

This airport requires a serious amount of traffic to block, but it can still happen with a lot of traffic, with planes having difficulty moving around the airport, as well as difficulty landing. As a result of this, higher capacity airports have been introduced.

The Intercontinental Airport is now OpenTTD's largest airport. Boasting 4 runways, and an overall footprint of 11x9, it easily dwarfs the International Airport. Designed to be the hub of airport services, the airport can have two planes take off and two planes land at any time; it also has two helipads. However, it can still clog at high traffic.

All planes can land at this airport with a low risk of crashing, but that risk is still present. This airport has eight terminals for loading, and two hangars. Aircraft will usually take off from the same side they landed, but can change, depending on how full the terminals are.

When building heliports, you should keep in mind that helicopters become unavailable somewhere between 2030 and 2050. This has the consequence that you can not renew old vehicles and stations with heliports only remain isolated.

To avoid this you can disable expiry or reactivate already expired vehicles, or use NewGRFs like the Aviators Aircraft Set that don't expire.

Only helicopters can land at a heliport and only one helicopter at a time can load or unload (like with the Small Airport). The Heliport occupies only one tile, so it is very convenient for use inside a crowded city. The Heliport is one of the three original airports in the original TTD, introduced for helicopters to load and unload inside cities.

The Helidepot is similar to a Heliport, except it is not a tall building, but more like an airport. It also has one hangar, making this suitable for placing inside cities, and removes the need to build an airport for a simple helicopter route.

The Helistation, quite simply, is a larger version of the Helidepot, with three helipads instead of one.

Airplanes have a small chance (0.07%) of crashing each time they land at an airport. Big planes have a high chance (5%) to crash in small or commuter airports. Keep this in mind when building small airports!

See the air comparison table for a list of "small" airplanes that can be safely landed in small airports.

If the patch option "Airport placement controlled by noise level" (available since OpenTTD 0.7.0) is activated, the number of airports which can be placed in the vicinity of a town is not fixed to two, instead it depends upon the noise level of the airports, their distance to the town centre and the town's attitude.

The town's maximum permitted noise level is 3 plus the population divided by a constant. The constant is settable through the openttd.cfg file, and defaults to 800 for permissive, 2000 for tolerant, and 4000 for hostile.

While the vanilla game does not provide any options that allow you to change the airport introduction dates, the OpenGFX+ Airports NewGRF allows you to change this (available in the in 'Check Online Content' menu in game). The option can be found under the 'Set Parameters' menu. 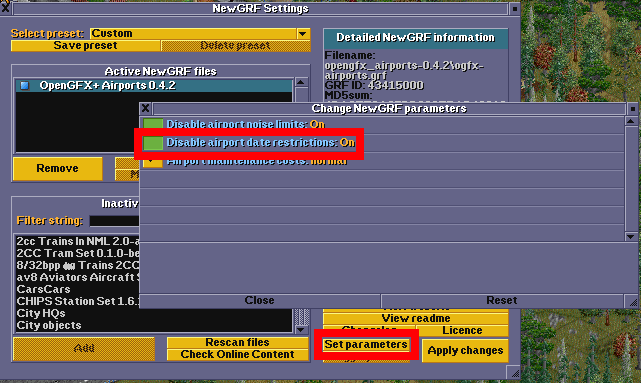