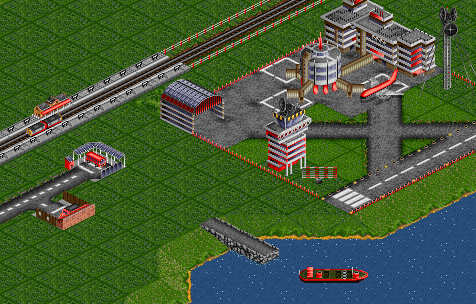 Each mode of transport has its own type of station:

Stations you place directly adjacent to one another (of any kind) will combine to form one logical station. That is, they share their cargo acceptances, name and pool of cargo to be collected. They of course maintain their physical location and layout. So for example, you could have a train station with a bus station attached - the bus station would share a pool of cargo with the train station, but allow passengers to be picked up and dropped off by buses as well as trains.

You can combine stations for many reasons:

There's a limit for the maximum area a combined station can cover. By default the limit is 12 x 12 tiles, it can be changed in the stations section of the advanced settings window. It's possible to build a separate station directly next to a station of maximum size by Ctrl-leftclicking on the desired tile and selecting to create a separate station, as described below.

Note for original Transport Tycoon and Deluxe players: in OpenTTD you can connect 2 or more same kind of stations (e.g. conventional railway station with monorail station), similar to Chris Sawyer's Locomotion except with greater extending freedom. 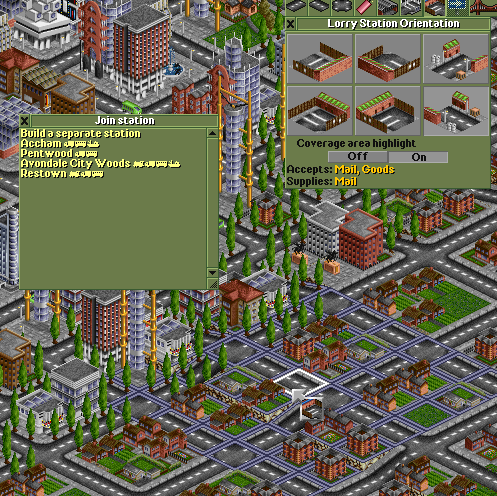 Combined stations need not be physically adjacent to each other - at least not in the long run. You can build a chain of stations and delete intermediate links in that chain, and the "detached" stations will still be part of the same logical station.

From 0.7.0-beta1 onward you can also build combined stations by Ctrl-leftclicking when placing a new station. A popup window will ask which station you want to join to, or build a new station. Stations which are too far away from the place you clicked won't be listed. You also have to hold Ctrl when extending any part of that station and new extension is physically adjacent to any part of that station.

You can remove a component of a combined station using the dynamite tool which will remove just that individual station, not the overall thing. The exception to this is train stations, where dynamiting one part of a train station will remove all of them (or not, if there are trains in any of them). To remove these, you should select the "build station" tool

and then the "clear" tool

which will allow you to remove train stations one tile at a time.

Care should be taken if deleting part of a combined station that is physically separate from the rest of the combined station if you want to replace it afterwards. Simply replacing it will create a new, separate logical station - to keep it attached you will either have to link-and-delete out from one of the attached stations, or starting from OpenTTD 0.7.0-beta1 using the Ctrl-leftclicking method as mentioned in the previous section.