The first Aircraft are designed in 1928.

Aircraft are the most efficient and profitable method of transport of passengers in the game, with large capacities and the capability to travel long distances much more quickly than a train.

Aircraft also are capable of carrying small amounts of mail, and many can be Refitted to carry other types of cargo as well. However, since their capacity to carry either mail or other cargo is fairly small their usefulness in carrying anything but passengers is limited, especially when compared to trains.

Beyond building airports, no infrastructure is required for buying an aircraft. Airports do take up large amounts of space however, and so finding (or creating) enough flat land in a reasonably central location within a city can be challenging. Airports successfully placed inside in a large city will rapidly overflow with cargo. They are ultimately limited by the number of gates in the airport, and the long delays in landing and loading cargo.

OpenTTD contains helicopters, but most players consider them almost useless: they're slow; the capacities are very small; they cost almost as much as a plane and in the future era they become obsolete without an endgame replacement. Nevertheless, the miniscule footprint for helipads occasionally tempts players to try using them anyway. Some players put multiple helipads within one city as an expensive, but faster replacement for buses.

Below are links to a Comparison table and the plane database, with planes grouped by type, then sorted by design date.

Small aeroplanes are able to land on small and commuter airports without crashing as frequently as the larger ones. A useful technique is to override the colour of small aircraft to something different to your default, which makes them easy to spot when you build aircraft. 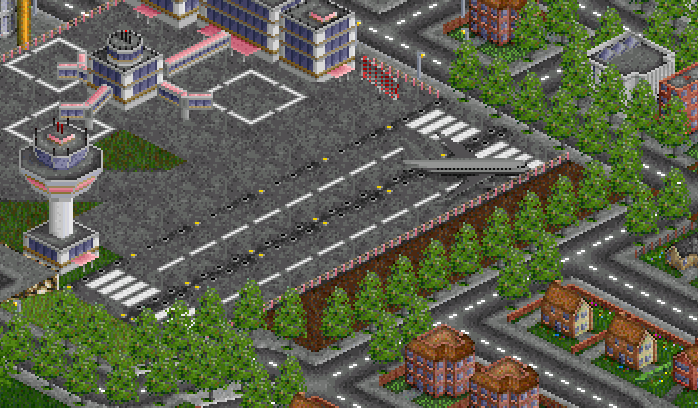 A crashed airplane, with some buildings removed for clarity. 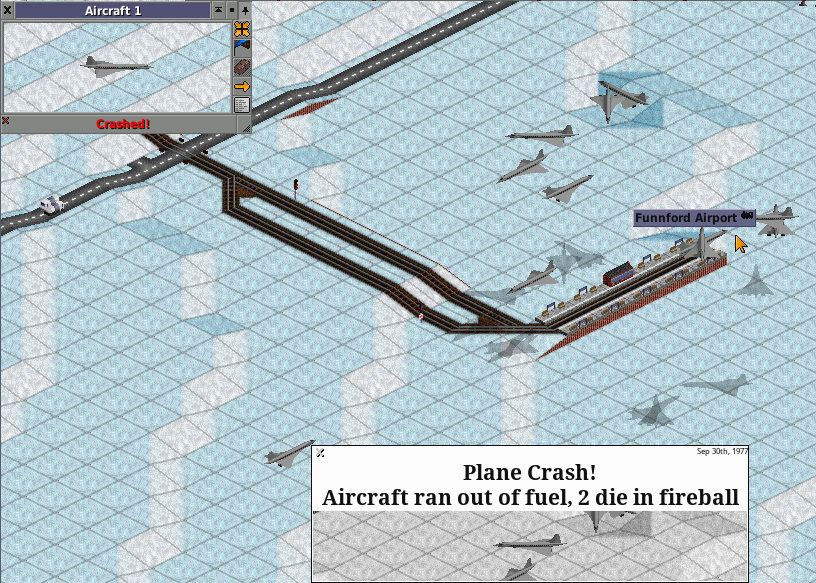 This happens when there is no airport on which the planes can land.

Aircraft will occasionally crash on entering an airport. This will block the runway it lands on for a while and lower your ratings at the airport considerably.

Airplanes have with default settings a small chance (0.07%) of crashing each time they land at an airport. Big planes have a high chance (5%) to crash in small or commuter airports. Keep this in mind when building small airports! The amount of these random plane crashes can be configured in the advanced settings under Disasters/Accidents -> Number of plane crashes (Advanced Settings).

Aircraft will also crash when all airports of that company in the game are destroyed (actually when the ghost station that remains after destroying the airport has disappeared also). The aircrafts will explode in mid-air and crash.

Aircraft crashes can be almost completely disabled from the Advanced settings menu (Advanced settings -> Disasters/Accidents -> Number of plane crashes -> set to "none"). Note: Large aircraft always have a possibility of crashing when landing in small or commuter airports.