The interface for groups can be found in the vehicle list if you have the Use the advanced vehicle list setting enabled (it defaults to Own company, so you see groups for your own vehicles, but not any opponents).

The vehicle list, with groups on the left, and group management buttons labelled.

The buttons are fairly self-explanatory.

We have six buses running the same route (using shared orders), so let's make them a group for easier management.

Creating and naming a new group.

We now need to add vehicles to our new group.

(Vehicles can only participate in a group of the same type: trains, road, air, or sea.)

Adding a vehicle to a group.

We could add all of the buses this way, one-by-one, but there is a faster way. Because they all share the same orders, once one has been added, use the 'manage list' menu to 'add shared vehicles'. This adds the other buses with the same orders to the group. 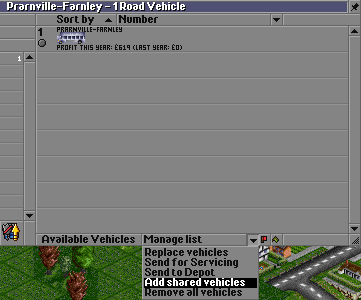 Adding all vehicles with the same orders to a group.

Groups give a context to the vehicle list, like shared orders, although they can contain vehicles which are performing different routes. (For example, we may later split these buses and make a few of them use full load orders, but still want to treat them all as one group.) This means that we can perform the usual operations on these buses using the 'manage list' menu:

We can also use groups to protect vehicles from being automatically upgraded, if you've set vehicle replacement rules for 'All vehicles'. Click the 'no autoreplace' button under the group list, which will toggle to show a small, gold shield. You could, for example, use this to keep a decorative steam train unchanged while automatically upgrading all other services to diesels.