When two lines of track merge into one with high traffic, trains will stop and queue up on each line, taking turns entering the merged track. This sounds like a great idea, but because the trains start from stationary each time this significantly slows down overall traffic. Your train network will often be better off giving priority to one line of track (preferably the one with more traffic) and allowing the trains on it to clear the merge at full speed before trains on the other line can access it.

Using specialized signalling you can force trains entering the merge to wait for a gap in order to reduce traffic disruption. 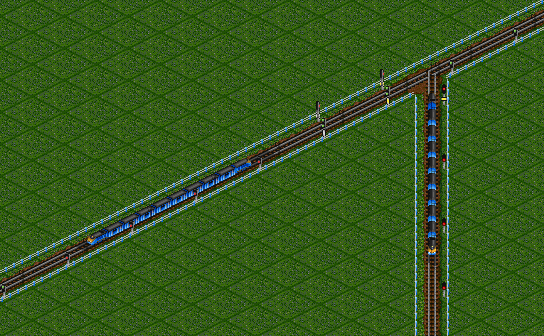 The simplest form of priority.

With two-way pre-signals and nothing extra you can force a merging train to stop if there's a train already on the main track directly in front of the combo or exit signal. The disadvantage to this construction is that you can't extend the priority further than the length of two signals. 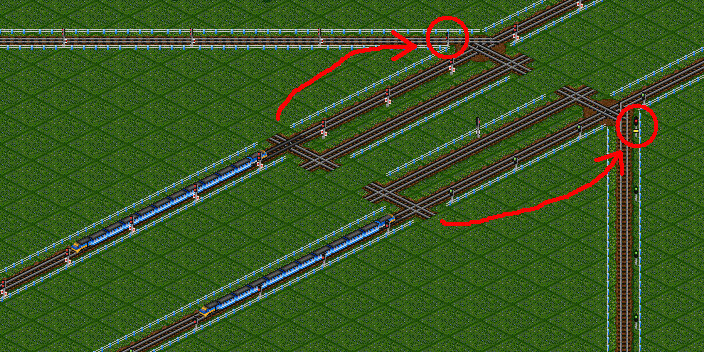 Longer priority can be designated by connecting track to activate the main merging signal upstream. When a train on the prioritized track drives onto a tile connected to the unused track it tells the signal on the merging track to read red. This construction can be made with both path signals and regular block signals on your tracks. The path signal construction needs only a single block signal on the merging track, while the block signal construction requires pre-signalling on the unused track to prevent trains from signalling themselves to stop.

Be careful to construct priority merges to accommodate your shortest train's length. If you have too much space in the middle, a train can briefly occupy a section of track without activating the merge signal, allowing a train to merge and disrupt traffic. This can be prevented by splitting longer priority into segments. 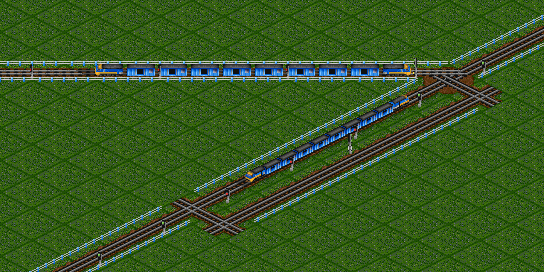 Flawed priority merge with too much un-prioritized space. Notice the merging signal is green when a train on the main track is in the very center. 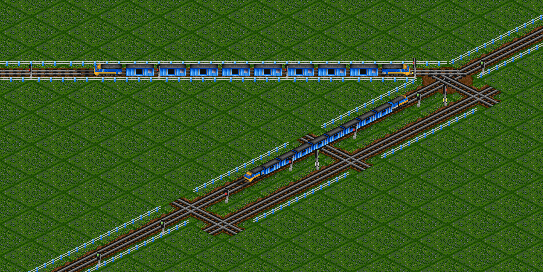 Longer priority merge fixed by splitting the priority into segments. The merging signal will read red no matter where a 5-tile-long train is on the priority

Sometimes you just don't want your traffic flow to get disrupted period. Using ordinary priorities where a train can join track after braking means that if you want to prevent the joining train from causing other trains already moving at maximum speed to come near it while it's accelerating and force those trains to brake, you need to extend the length of the priority to accommodate the joining train's entire acceleration room needed to reach maximum speed from stationary. Priorities can get extremely long and they also result in long gaps between trains on the merged track, lowering its efficient traffic capacity. 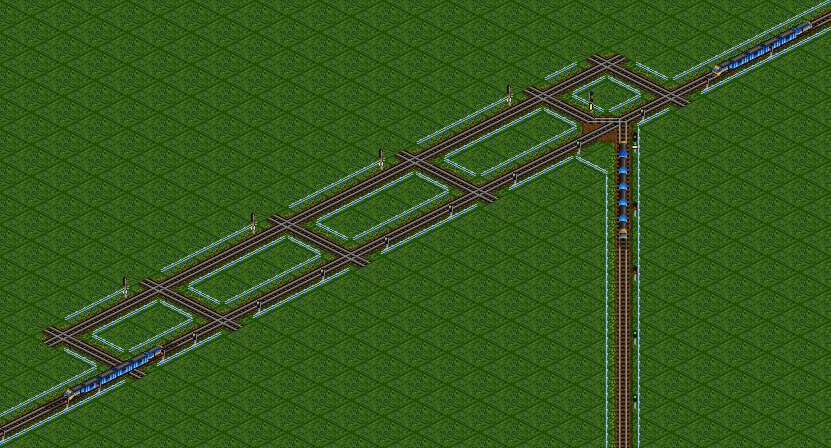 Length a regular priority needs to be in order to prevent any traffic disruption for these particular 3-tile trains. If the back priority here were any shorter, the train behind the joining train would bump into it and be forced to brake as the joining train took time to accelerate to maximum speed itself. All priority merges in reality also need a bit of prioritized track in front of the merge as well as behind in order to prevent the occurrence of a joining train approaching too close to another in front of it on the merged track.

Instead, you can prevent a train from accessing the merge at all (and braking) if the priority is occupied. Red two-way signals are the ultimate train pathfinding penalty in OpenTTD: a train will choose any other track option available to it in order to avoid one even if it contradicts its orders and ends up getting it lost. You can use this to your advantage by disallowing trains from even attempting to access a prioritized merge (and ending up braking) if there is currently traffic running on it. By placing a two-way signal at a merge with another track option continuing after it, trains will ignore the merge entirely when the priority signals that it is occupied and continue on their way using the other track option.

High-speed track merge. A train will avoid merging when another is detected on the priority and the entry signal reads red, and instead will continue moving along the lower track. The entry signal being two-way instead of one-way is the key. Note how much shorter the track priority can be when trains can only join at full speed. Necessary priority length is also not affected by the acceleration time of the trains like this; only train length determines it.

An extra signaling mechanism is needed in order to prevent the occurrence of a train braking at the merge point. Thus, pre-signals must be a part of these constructions. 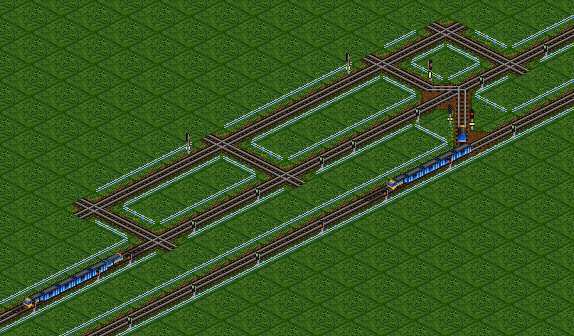 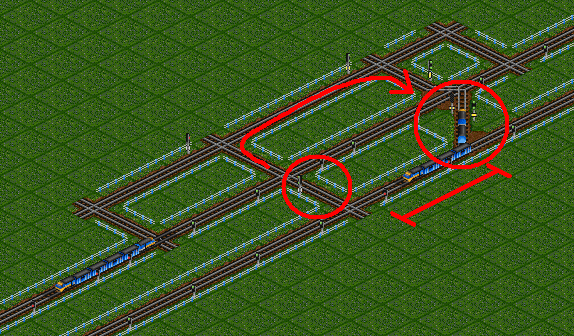 High-speed merge design fixed with an extra signaling mechanism. An extra exit signal allows the entry signal at the merge to read green even when the other exit signal on the priority is red. Moving the two-way entry signal half a tile further up is crucial for giving the train room to deactivate the exit signal monitoring its presence. In effect, once the merging train passes a certain point near the merge, it signals to itself to keep the merge "unlocked", even when another train is on an early part of the track priority.

By taking the alternative track for when a train does not enter the merge and looping it back on itself it is possible to give a train continuous opportunities to merge while keeping it in full-speed motion.

Looping the failure-to-join track back on itself. 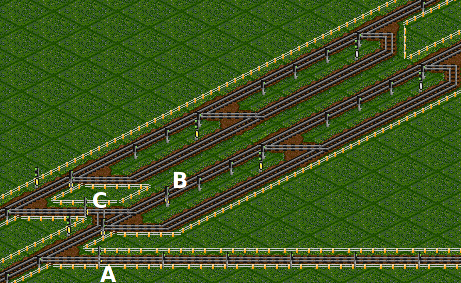 One method of merging onto dual main line without disrupting traffic.

All signals are combo signals except at points A and B which are entry signals, and the top right, which are exit signals. Adjust the length of the signal chain according to train length and speed.

Other uses for this include Right-of-way Lane Change and Building depots.