This type of junction is only good for lines where you want trains to go one direction only, from a raw material industry to a production industry or a final industry, for example from a Iron Ore Mine to a Steel Mill or from a Coal Mine to a Power Station. Note that a tunnel was used instead of a bridge. This is because tunnels have no maximum speed. Speed is everything so if you have to build a bridge, build the fastest one you can. 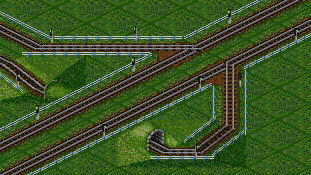 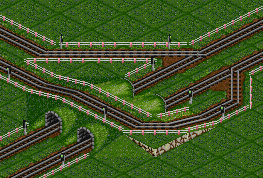 This version is shown here as alternative, but it is by all means worse. In this version mainlines have tunnels where you cannot place signals.