Note
This page describes only railway depots. There are also depots for the other transport types.

Here you will learn how to build (place, position) the depots so they align with your tracks. Depots are places where you build your trains. They are also used by running trains for servicing, so make sure trains can enter and exit from depots.

How do I place a depot?

Remember, you can always destroy your depot with the dynamite tool

Where do I place a depot?

Where to place a depot is a strategic decision completely up to you. (You can always just stick couple of depots on your lines and hope for the best

You should make sure that trains:

There are a few strategies for achieving those purposes:

The most common problems related to depots are:

Other advantages for this configuration:

Trains waiting in the depot until there is a free platform. Note the path signal in front of the depot entrance. 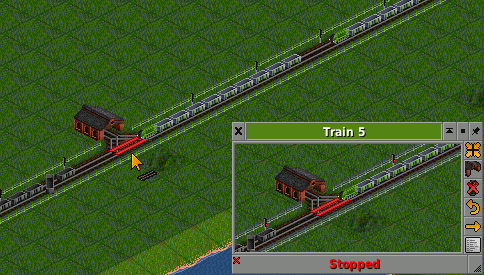 Be sure to stop the trains when modifying tracks or signals around them; failure to do this may lead to another crash.

Right-of-way depot. The train from the main line has the priority over trains exiting the depot

Split in 2 or more rails before servicing is useful if the traffic is high. The trains slow down when entering depots so a queue of trains may appear before a depot. If the trains are directed to 2 depots using Signals then 2 trains can be serviced in the same time allowing a high traffic on that line. 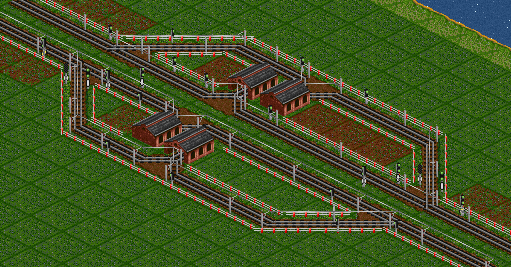 This does not affect the average speed on the main rail.