In this tutorial, you can learn how to proficiently build (place, lay) and delete railway tracks, and what options and commands are present for doing so.

How do I lay tracks?

First of all, you must open the Railway construction toolbar - click the railway build button (

) on the menu bar to display the railway construction toolbar:

Besides laying tracks on flat land you can also Build on slopes. There are two ways you can lay tracks:

). The example uses the 4th button.

To remove the tracks, select the Remove tool (

). The white square will change to a red square. Now you can simply click & drag along the existing tracks to remove them. Click the tool button again to deselect it. You can also use the R key shortcut to toggle Remove. For rails only, holding Ctrl key activates removal.

) from the railway construction toolbar. You cursor will change to represent Autorail feature. The shortcut for this is A.

Deleting a piece of tracks with clear button

There are two angles at which the tracks can connect.

Below is a 45° connection, a train can pass through one such connection without slowing down. However, if the same train is on more than one 45° connection at once, it will slow down. 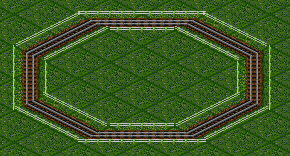 This is a 90° connection. A train slows down considerably every time it has to pass one of these.

If the advanced setting "Forbid trains and ships to make 90° turns" is enabled, then trains cannot pass this kind of connection and will stop and reverse like the end of the line.

You will find that you can become very proficient at laying tracks if you master the A, Ctrl+A and D shortcut keys - A for Autorail (Ctrl for remove) and D for Dynamite. Use X to toggle tree and building transparency/visibility - also very useful. See also the list of shortcut keys.