Unless the economy is set to steady it may go into a recession 2-4 times per century. Each recession typically lasts 9 to 12 months. During a recession these points change:

Note: It is possible to get a century with 4 recessions, but that is a very rare occurrence. You are much more likely to get 2 or 3 recessions in a given century.

Loans can be taken out by a player. The maximum loan varies during the game according to inflation. Loan interest is paid monthly to the bank, at the current interest rate. The initial interest rate is set at the game start according to the difficulty settings. The interest rate does not change during the game. To quickly repay a loan, press ctrl + click the repay loan button on the finances screen, which allows you to repay as much as possible. The same goes for borrowing money.

If you buyout a company (see the next section), their loan will be added to yours. This can cause you to have a loan bigger than the normal maximum permitted loan amount.

In single player, once a company has started selling its shares, you may buy them 25% at a time by paying 1/4 of the company's labeled value. You may then sell them at a later date when the company's value has increased for a profit, or buy 100% to take over the company. In doing so you will gain all of the company's vehicles, infrastructure, and cash, but also their debt.

Shares can be used to make a lot of money, if you buy and sell them at the right time. Buying shares in a starting company is very cheap, but it can be risky, because the company might fail and your investment is lost. But if the company flourishes you can easily get your investment back hundredfold (or several thousandfold, if you wait long enough).

Note that for multiplayer games, you can only buy 75% of a company. There is no way to take over a rival company (run by a human).

In order to buy shares, the company of which shares will be bought from must be at least six years old (configurable as of commit 7c9dedb). 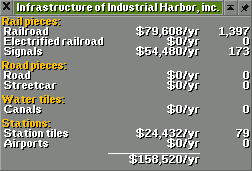 Why did I build so many signals?