Historic content
This page or section contains content that is no longer relevant for the current version of OpenTTD. Please keep it intact because it shows some of the history of this wiki as documentation.
As of OpenTTD 1.3 (r24791), these settings have been merged into the Advanced Settings.

In versions of OpenTTD before r24791, it is possible to change the difficulty options on your game by using this dialog. Some options can only be changed before the game has started. Three preset difficulty settings can be toggled by pressing the buttons at the top of the dialog (Easy, Medium and Hard), or customize (Custom button). For each level you can also view the High score chart by pressing the green button below the difficulty level buttons. 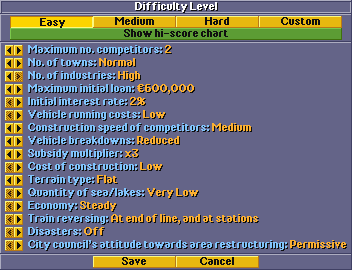 This is what the easy difficulty menu looks like

Preset difficulty levels. Select one of these to choose how difficult the game will be. You can also change levels by pressing the left and right arrows. Altering any of the settings from the presets of any of the three difficulties will change the difficulty to "Custom" instead.

The maximum number of AI competitors. If you are playing a multiplayer game you may not want this too high otherwise other people may not be able to join and have their own company.

How many towns there will be in the game. This is also affected by the map size. A very small map will never get lots of towns, while a large map will have a lot more. This can be set in two places (here in difficulty settings or in the new terragenesis panel) when set to high you will have lots of towns and more passengers.

How many industries there will be in the game. This is also affected by the map size. A very small map will never get lots of industries, while a large map will a lot more. This can be found on the generate map dialog too.

This is the maximum loan you can have at the start of the game. The amount slowly increases with game time.

This is the % of the loan you will be paying each game year. This doesn't pay off the loan itself.

This is the cost per game year that all your vehicles have to pay.

This is how fast the AI competitors build. If this is set too high they will have a giant network running in no time.

This is how often your vehicles breakdown.

How much the income is multiplied on a subsidy service.

This is how expensive it is for you to build anything and terraform the land.

How the land is formed from flat to mountainous. This can be found on the generate map dialog too.

This is how much of the map is taken up by the water. This can be found on the generate map dialog too.

If the economy isn't set to steady, it may go into a recession, which causes a number of points to change.

This specifies trains can reverse, either at station, or only at the end of a line. Even with this set to "Only at end of line" a player can hit the "turnaround" button on the train interface to turn the train around.

This specifies if Disasters are on or off.

This is how willing a local authority is to let you build near and in their town.

This is how long after you have started your company the AIs will start.

How intelligent the AI competitors are at building their tracks and running their company.